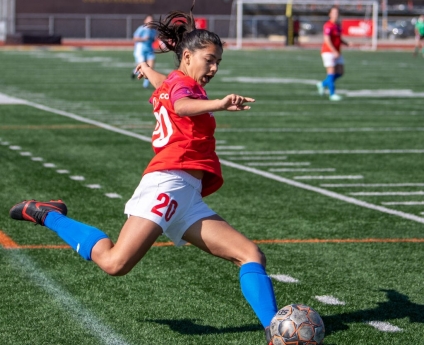 May 28, 2019 (San Diego) -  ASC’s Marlene Avalos blasted in a 30-yard free kick in the 90th-minute in an attempt to equalize the match but came up short with a near miss.  Despite a dominant second half with the majority of ball possession, the home team was unable to find the back of the net and earn their first WPSL victory.

The visitors opened the scoring in the 10th minute when San Diego Sealions’ Kiera Bocchno was able to bring down a pass from teammate Cori Deason and tap in a goal just past the diving ASC San Diego keeper Kori Butterfield. This would be the only goal scored for the San Diego Sealions. ASC put the effort in before the half by creating opportunities to even things.

Forward Natasha Kai had a couple of close-range chances only to see them skim just shy of the net. The 33rd minute saw ASC San Diego midfielder Marlene Avalos launch a rocket that found the top corner bar for a near miss. The score at the half rests at  0-1.

The second half of play saw ASC come full force in their attempt to get the win and earn a valuable 3 points in regional play.

Midfielder Marlene Avalos had another close-range shot in the 47th minute that sailed wide of the net, while in the 87th minute Alyssia Anaut sent a perfect ball to Jazmin Valencia who was unable to put the shot in.

The home team’s defense also stepped up their efforts in the second half. Defender Devon Molina single-handedly stopped two goal attempts from the away side after Deason managed to dribble past Butterfield as she came out to prevent a shot. These amazing second-half efforts came just short and the final whistle saw the score remain unchanged at 0-1.

ASC San Diego (0-0-3) is on the road next Sunday at Canyon Crest Academy to play the San Diego Surf at 4 p.m.  They will be at home again on June 8th to face off against San Diego Paceiro Ladies in the first match of a doubleheader at Mission Bay Stadium.