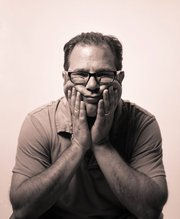 June 3, 2011 (La Mesa) -- When I first met David Moye, he was a sixth-grader at Maryland Avenue Elementary School in La Mesa, California. The school’s students went on to a variety of colleges, careers and dreams.  David's dreams varied from music to public relations to living the American dream. In 1995, he started his career of weird news wriitng.

"La Mesa," he says, "is the perfect place to start a career in weird news." After all, he tells me, he remembers the story of Frank Zappa coming up from El Cajon to La Mesa to go to the music store to find an obscure LP he had been searching for since reading a Look magazine article: The Complete Works of Edgard Varèse, Volume One. "Where else coud Zappa have possibly found such a work that influenced the world of modern music so much?" he asks."Where else could you find The Age of Unarius?"  The East County cult-like group believed there would be 33 spacecraft landing one on top of the other to teach us the way of peace and harmony. Those are just two among many experiences that led Moye to start a career in weird news.

He became the senior editor of Wireless Flash, providing many guests and news stories for shows like The Daily Show. Then in 2007, he left Wireless Flash to try his luck at his own straight business job in internet marketing. After deciding to go into public relations (PR), he found no one would hire him; even the people who months earlier had told him he would be a genious in PR.

He then started promoting himself by doing an instructional series called PR Puppet where he offered PR advice to his daughter's puppets. Sending it to CNBC correspondent, Jane Wells he found that she featured the video twice.  After that, he said to people: "If I can get a cheesy puppet show on CNBC, think of what I can do for your good clients."

Pretty soon, AOL hired him to be part of the staff of AOL Weird News. Lately AOL and Huffington Post have merged, and Moye is now doing his Weird News for Huffington Post. So, David Moye, our hometown boy who got his start writing about the inhabitants of East County, has found his perfect niche in a one-of-a-kind national writing career. We are all part of his dream.