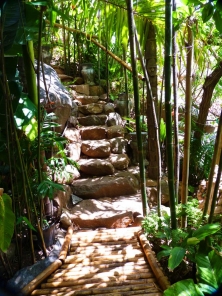 August 7, 2010 (San Diego's East County) -- “I like Disneyland, so I created an escape environment,” said Bob Caparas, who single-handedly planted all landscaping and built each masonry wall, bridge and waterway at his private Shangri-La complete with switchback trails through a tropical jungle filled with prehistoric-style artifacts off Grandview Road. 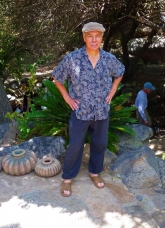 Mayan and Aztec-style artifacts --including a petroglyph of a feather serpent god by the owner-- provide fantasy elements for the adventurous at heart along a steep, rocky trail leading to a prehistoric area complete with dinosaur bones. 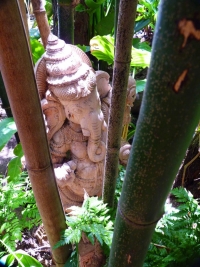 The one-third acre property seems far larger, also encompassing a mini-Stonehenge made from rocks excavated on the property, as well as an Asian bridge through a bamboo forest that emerges in a grotto with Buddha statue. 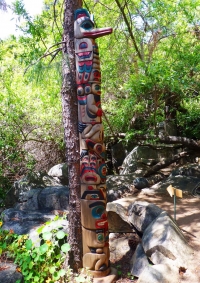 Another section includes a dragon tree forest, while yet a different area features a conifer forest, authentic Northwest coastal Indian totem poles, as well as petroglyphs created by the hard-working homeowner. 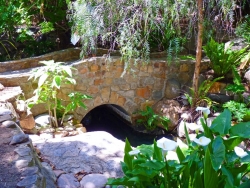 Caparas unearthed a year-round stream after excavating tons of dirt, filling three dumpsters with debris from had once been a neighborhood dumping ground before he transformed the 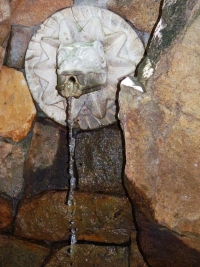 property into a setting that looks as if it came straight out of an Indiana Jones adventure movie.

He created an arched stone bridge to span the new-found waterway, as well as a primitve-style stone fountain.

He and his wife, Carol, have raised their two daughters here. But alas, the girls don’t share their father’s spirit of adventure. “They won’t go outside, because there are lizards out there,” he revealed. 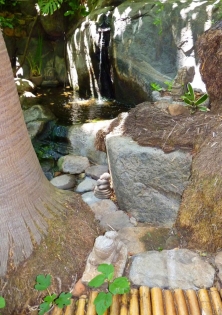 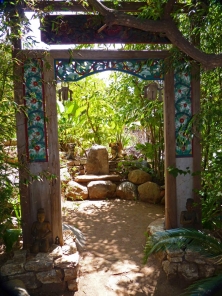 Presently, I am working as a florist, i am amaze with this garden, can you give me some tutorials on how to improve and make your own garden as beautiful like this one? http://sanleandroflowers.wetpaint.com/page/Best+San+Leandro+Florist