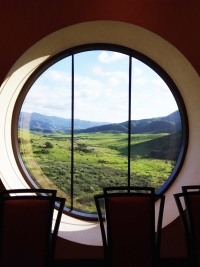 March 21, 2017 (Jamul) – Final Cut Steakhouse offers a premier menu of artfully prepared dishes served up amid the glamour of vintage Hollywood. You can also savor spectacular scenic views through a wall of windows high atop the new Hollywood Casino Jamul-San Diego.

You don’t have to be a gambler to be a winner at Final Cut Steakhouse! 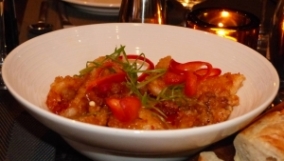 My family and I started our feast with calamari served with sweet chili sauce and lemon, a zesty and colorful  treat.  We also sampled fingerling potatoes with mustard, cilantro, bacon and Burrato cheese- a delectable sensation.

Naturally I had to sample a little of everything that each of our family members ordered. (This is a tough job, but someone’s got to do it!) 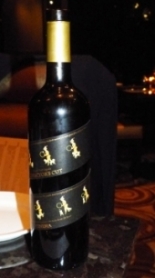 We also took the sommelier’s advice and shared a wonderful bottle of wine: Francis Ford Coppola’s Director’s Cut “Cinema,” a cabernet-zinfandel blend that was rich and smooth.

A lobster bisque with tarragon cream included marinated chunks of succulent lobster.  The onion soup had a rich flavor complements of chicken stock, carmelized onions and brand.  Brussel sprouts had a surprising sweet and tangy combination thanks to a honey mustard marinade.  A macaroni and cheese with aged cheddar was also excellent.

Each dish, we found, had a little something special –a meal suitable for an Oscar  winners’  celebration!

For my entrée, I had filet mignon with peppercorn sauce – very tender, tangy, and cooked medium exactly as ordered.   Two others at our table also ordered steaks – a filet with bleu cheese and a top sirloin with chimchurri, both  very satisfying.

The steaks are superior in every respect,  priced accordingly. Fortunately for those without a high-rollers budget,  there is a special price-fixe menu on Wednesdays, Thursdays and Sundays for just $30. It includes soup or salad, choice of several entrees, and dessert. 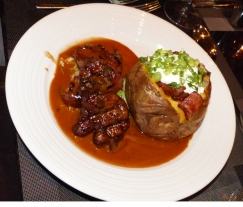 My daughter chose the price-fixe menu option, with medallions of beef as her entrée.  It included mushrooms (a surprise that we suggested be disclosed on the menu, as she’s not a mushroom fan).  Fortunately she was happy to share the delicious morsels with the rest of us, and savored the meal anyhow. It came with a loaded baked potato,

Other main dish options on the price fix menu include pan-seared jumbo shrimp and roasted chicken.

Bananas foster for desert rounded out our evening, served with berries and citrus.  We also had a birthday to celebrate, which included birthday cake complete with beignette-style pastries and happy birthday written in a chocolate sauce.   Custom lollipops completed the meal. 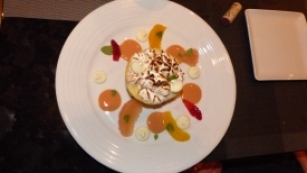 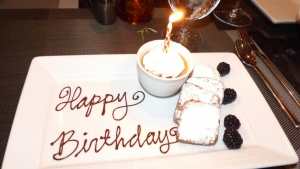 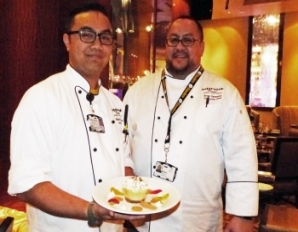 and the Alpine Inn.

“We’ll have four to five dishes coming soon,” he disclosed.

Here’s a sneak preview of coming attractions:  they will include bringing back Chilean Sea Bass and adding cauliflower with  Moroccan spice.  “Now that I get to play in the kitchen, we’re bringing it back,” he says of the Chilean Sea Bass, formerly the best-selling seafood item on the menu.  For his cooking test here,  Simmons’ prepared sea bass with a miso glaze.  I look forward to coming back and savoring this new entrée addition soon.

Simmons oversees all eight restaurants at the Hollywood Casino Jamul-San Diego, so if you enjoy his cooking, you can check out some of the other eateries here, too. 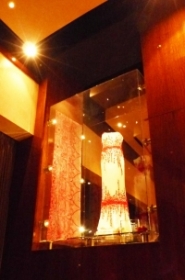 A special part of visiting the Final Cut Steakhouse, however, is the ambience.  The décor reflects the golden age of Hollywood in the 1930s and includes display cases with clothing and costumes worn by stars from Marilyn  Monroe to Christopher Reeve.  It’s fun for fans to see familiar outfits from movies such as Superman and Sea Biscuit while waiting on your meal. 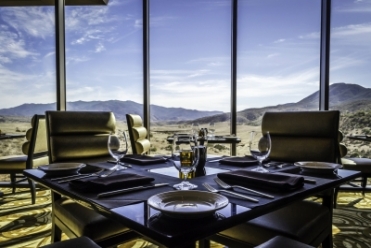 If you arrive before dark,  you can also relish beautiful views of rolling green hillsides in the Jamul countryside. I can’t think of another restaurant in East County  with views of  natural beauty, so this makes a wonderful addition for those who want to gaze out at nature  while dining out.

There’s also an outdoor patio with heaters and an adjacent bar with glowing amber façade and porthole style windows,  as well as a private dining room for those celebrating a special occasion.

One added note:  We visited on a Wednesday evening, and found no traffic during a short but pleasant drive along Highway 94 (Campo Road).  There’s free valet parking, too--making this a good bet for dining out in East County.