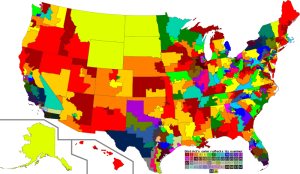 The case pitted the Arizona legislature against the state’s voters.  Justice Kennedy wrote the opinion, which concluded that barring a voter-approved redistricting commission would “run up against the Constitution’s animating principle that the people themselves are the originating source of all the powers of government."

He added that while the framers of the Constitution may not have envisioned the modern initiative process, “the invention of the initiative was in full harmony with the Constitution’s conception of the people as the font of governmental power. It would thus be perverse to interpret 'Legislature' in the Elections Clause to exclude lawmaking by the people, particularly when such lawmaking is intended to advance the prospect that Members of Congress will in fact be 'chosen... by the People of the several States.'"

The four conservative justices dissented to exclusion of the Legislature from redistricting, writing, “No matter how concerned we may be about partisanship in redistricting, this Court has no power to gerrymander the Constitution."

If the high court had ruled against Arizona voters, the case would likely have overturned California’s independent voter commission along with those in 11 other states.

Common Cause, a nonprofit group advocating for restoring open government, joined with the Arizona Independent Redistricting Commission to wage the legal battle all the way to then nation’s highest court.

Common Cause national redistricting director Kathay Fang hailed the decision as a victory against gerrymandering.  In an email to supporters of the nonprofit organization advocating for citizens rights, she wrote, “Voters in states across the U.S. have taken a stand against gerrymandering by creating independent citizen commissions that put the public, not politicians, first.”

Hours after the ruling, Common Cause launched an online petition asking Congress to guarantee fair and independent redistricting in all 50 states.