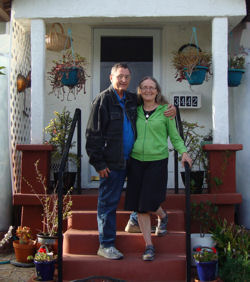 “It’s just the right thing to do.” – Gene Dolphin
How Kathy and Gene Dolphin walk their talk every day
By Faith Attaguile
June 11, 2012, (San Diego) -- When the energy “crisis” hit California in 2001, Kathy and Gene Dolphin got angry.
The roving blackouts and triple-digit rate increases in California caused by Enron’s market manipulations tipped the scales. The soaring electric bill pushed them over the edge.
That was when they decided to go solar.
“I can’t say that I had pure motives,” Kathy said. “I just wouldn’t let anybody have that kind of control over me again.”
How it all began
The Dolphins live in a cozy two-bedroom, one-bath stucco cottage in the wonderfully diverse neighborhood of San Diego’s Normal Heights.
A spacious 2-car garage almost doubles the living space of their 600-square foot home. Serving as the “gas-up” space for their new electric car, the garage also holds their washer and drier and doubles as a workspace for their many projects.
The decision to go solar after the 2001 Enron scandal didn’t come out of the blue. Kathy and Gene had been consciously downsizing their energy needs for several years before then.
Their journey began at a 1999 Ocean Beach fall fest celebration hosted by the OB Peoples’ Co-op. Fascinated by the fest’s solar-powered stage and sound system, the Dolphins began thinking about energy in a different way. 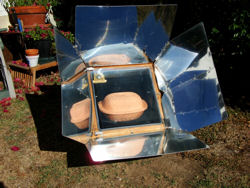 The first thing they did was build a small solar oven out of cardboard. It was a real eye-opener for them.
“Once we witnessed how a solar oven works,” Kathy said, “it changed our way of thinking. The solar oven uses reflectors, and as the sun moves across the sky, you move the oven. We experienced a direct connection to a beautiful source of powerful energy. And it was free!”
Pausing, Kathy exchanged a smile with Gene. “That little solar oven taught us something big,” she continued.  “A light went off in our heads. We realized that it’s not just about us. It’s about adjusting to the reality around us, being a part of it. The sun is for every living thing on this planet!”
Shrinking their energy footprint
From there the Dolphins began taking steps that moved them toward greater energy efficiency. Here are some of the first things they did: 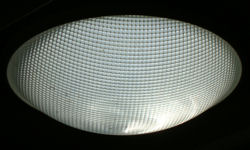 A strikingly distinctive project Kathy and Gene undertook was to install a solar light tube in the ceiling of their tiny kitchen. Not to be confused with a skylight, the light tube’s diffuser projects an amazing amount of light into the kitchen during the day, without glare … and without overheating the room.
Biting the energy bullet after Enron
It was after the Enron scandal that the Dolphins took the solar energy world by storm.
In 2004 they had Home Energy Systems install a rooftop 2.1KW PV (photovoltaic) system consisting of 33 panels. Martin Learn, the company’s owner, is now a good friend. 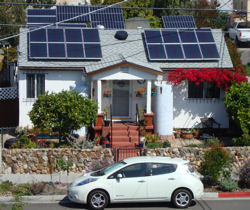 Their new PV system produced all the electricity they needed … and still sent excess back into the grid.
“The beauty of it all,” says Gene, “was watching the meter go backwards after the system was installed.” 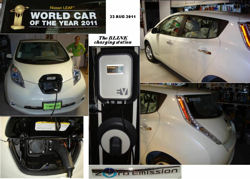 But when they bought a new Nissan LEAF this year, the Dolphins needed a system upgrade to provide the extra electricity a charging station would require.
Eight years of development in solar technology were on their side. When Home Energy Systems replaced 11 of their old solar panels with newer, more efficient ones, Kathy and Gene were able to double the amount of electricity generated by their system.
They could now charge up their new electric car … for free!
“People need to understand the numbers,” Martin Learn said. “Think about it. It costs about $3.50 (25 kilowatt hours) to drive 100 miles on baseline SDG&E electricity. It costs about $20.00 to drive the same distance on gasoline these days (figuring 21 mpg at $4.00/gal). I keep asking people, what are you waiting for?”
Next target: Water
Actually, the first solar product the Dolphins installed wasn’t their PV system. It was the rooftop solar hot water heater that they installed in 2001.
Noting that they originally hooked it up to a 40-gallon hot water tank, Kathy lamented, “That was stupid. We don’t use 40 gallons of hot water in a week and it takes a lot of energy to keep that water hot!” 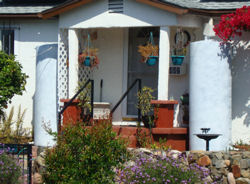 So when their tank finally died last year the Dolphins linked their solar water heater to an electric on-demand tankless system. Now, if the water they need is hot enough from the rooftop solar heater, it will pass through the on-demand heater without triggering it.
“Another way to save on energy,” says Gene. “Water and energy are connected.”
What about irrigation?
With all this activity going on, it was natural for the Dolphins to begin thinking about how they used water and what they could do to decrease that use.
First they tackled the grass in their front yard. Why?
“Because it involved a constant use of water,” Kathy explains. 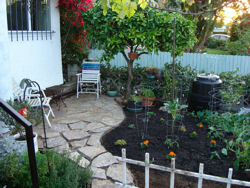 Now, instead of water-sucking grass, there are beautiful, fragrant drought tolerant plants and wonderful, curving pathways of river stone wandering through their small front yard.
Garlic, Peruvian ground cherries, day lilies, parsley, onions, peppers, fennel, escarole, red mustard, stevia and an array of fragrant herbs dot the area.
But even these plants need water.
So the Dolphins installed two, 250-gallon water tanks on either side of their entry porch. Painted to blend right into the stucco exterior of the house, the tanks gather rainwater off the roof and provide all the irrigation water the Dolphins need for their lovely front yard and vegetable garden.
All this, and still living with luxuries 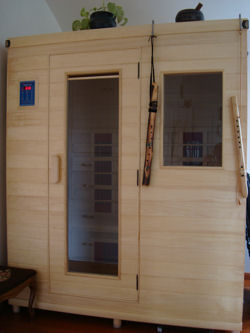 You might think their focus on energy and water efficiency would leave a somewhat Spartan house.
Not so. Kathy and Gene enjoy some unique luxuries.
One of them is a lovely sauna they bask in for 30 minutes each day.
Another is a water-efficient designer toilet/bidet … with a heated seat and a cover that closes automatically.
A third is a vented “whole-house” attic fan. Turn it on and the inside temperature of the house drops five degrees in five minutes.
“Knowing they’re all powered from energy coming directly from the sun into our own PV system,” Kathy notes, “makes them even more special.”
Just do it!
If the Dolphins love the simple life they’re living, it’s clear that what they enjoy most is actually living the change they want to see in the world.
“You know,” said Gene, “it’s kind of fun doing something because it’s just the right thing to do. You talk to your neighbors about it. They might come around and ask you about it, and nothing happens. Then, all of a sudden, you start seeing changes taking shape next door. They can see it’s working for you and they want to do it, too.”
Their message is clear. As Kathy said, “If we can do it, you can, too.”

Faith Attaguile is a freelance writer and copywriter for the green living world. Her website is FrontlineCopy.com. You can connect with her on Twitter, Facebook, Google+.