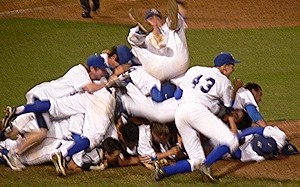 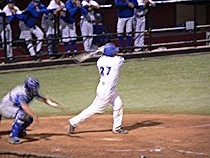 To call the Broncos' pitching impressive is a huge understatement. In two playoff games, Homick threw two complete games, giving up one run in 14 innings pitched. Teammate David Gabel threw one complete game; six innings in another, and gave up no runs.

Homick never faced more than five batters in any single inning in the championship game, but some credit has to go to the defense for making critical plays. In the top of the fifth, Grossmont's Robbie Nesovic hit a towering shot deep to right field that threatened to go for extra bases if it didn't clear the fence. Broncos' right fielder Matt Jervis caught up to the ball to make the catch on the warning track. 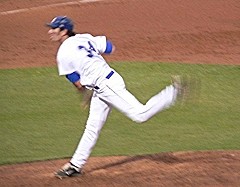 Homick also benefitted from the numerous line drives hit right at a defender. A line drive off the bat of Joe Musgrove resulted in an inning ending double play in the first and three other line drives were hit to the shortstop or third baseman. The few hits that the Foothillers managed to get off Homich never came in bunches, keeping the normally machine-like Grossmont offense from getting out of first gear.

"I was spotting my fastball, used my curveball and my changeup when I needed it," Homick said about his pitching.

Sankey's bat dealt a lot of damage to the Foothillers' hopes. He got the Broncos on the board first with an RBI double in the first inning. He later hit two more RBI singles and scored a run. 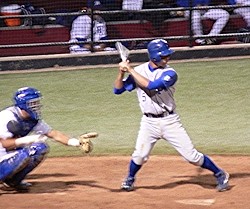 Grossmont finishes the season with a record of 26-8. They had won the 2010 Division II title with an 8-0 win over Helix. This season the Foothillers moved up to Division I, due to enrollment size, after playing in the Division II title games in 2009 and 2010.

Rancho Bernardo finished their season with a record of 27-6. This was their second straight Division I CIF title; they won the 2010 title game with a 9-5 win over Poway.