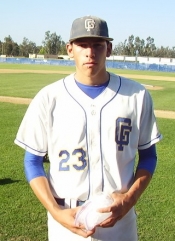 May 28, 2010 (El Cajon) - The Grossmont High School Foothillers' varsity baseball game overcame a slow start with two big innings to cruise to a 9-1 win over the visiting Grizzlies of Mission Hills (San Marcos) High School Wednesday (May 25) afternoon. Robbie Nesovic and Joe Musgrove each hit three-run homers to put the Foothillers ahead and in control.

The first three innings of the game turned out to be a pitching duel between Musgrove and the Grizzlies' starting pitcher, Ryan Coonan. It left fans wondering which team would blink first.
Part of the reason for the duel early on was that both pitchers had good command of their pitches. Another part of the reason is that a baserunning error cost the Foothillers a run in the first inning.
After Nesovic led off the bottom of the first with what appeared to be a solid double, it turned out that he missed first base while turning to run to second. The Grizzlies appealed the play and Nesovic was ruled out. Alex Connor later hit a double that inning that would have allowed Nesovic to score.
What the Foothillers offense could not produce early was made up for by the arm of Musgrove, whose pitching was simply dominant. Many Grizzlies hitters had trouble catching up to his fastballs as demonstrated by his total of nine strikeouts. Scouts in attendance had clocked some of Musgrove's pitches as high as 92 MPH.
"I've been making a few adjustments with my approach on the mound, a few minor things. The work's been paying off for me lately. My team definitely helped me out with some run support," said Musgrove about his piching.
The game never broke open until the bottom of the fourth, when Nesovic redeemed himself for his baserunning error. After Coonan gave up singles to two of the first three batters, he threw a pitch that Nesovic deposited over the short right field fence and Grossmont took a 3-0 lead.
In the top of the fifth, it appeared that the Grizzlies might get even the score. With two out, Cody Lenahan reached on an infield single and Aaron Salas added a double. With runners at second and third and the tying run coming to bat, Musgrove got out of the jam by getting Cody Boyles to ground out to first.
In the sixth inning, the Foothillers broke the game wide open. Nick Rochester hit a solo home run while Musgrove hit a three-run shot near the scoreboard min left center field. The Foothillers batted around and scored six runs to put the game out of reach.
"I was looking for a fastball, that's what he gave to me, low and in, and I just turned on it," Musgrove said about his home run.
Salas hit an RBI single in the top of the seventh, allowing the Grizzlies to avoid a shutout. It also prevented Musgrove from completing the game as he was replaced by Eric Eckley who finally got the last out.
"I think Joe pitched a great game, just him keeping us in the game. I did not think they were going to score more than one or two runs and he did a good job of throwing strikes, making them earn it," said Grossmont head coach Jim Earley.
The loss dropped the Grizzlies' record to 18-15 while the Foothillers improved their record to 24-6. Click here for up to date information in Division I playoff matchups.