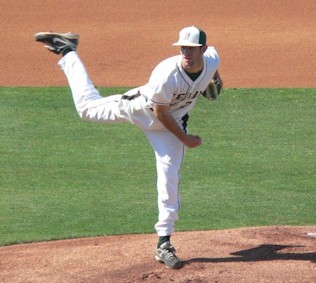 "I'm exhausted, but so happy right now. My arm could fall off and I wouldn't care."

June 6, 2011 (San Diego) - Jake Reed held off a last-inning rally, pitching a complete game with seven strikeouts and only one walk as the Helix Highlanders defeated the Steele Canyon Cougars 7-3 to capture the CIF-San Diego Section Division II baseball title Saturday (June 4) at SDSU's Tony Gwynn Stadium. Reed also helped his cause by hitting a triple and a double, scoring a run and batting another run in.

Both teams' starting pitchers struggled in the first inning. Reed threw a total of 22 pitches while Cougars' starter Frank Califano threw 27. Each pitcher was fortunate to have given up only one run after one inning. 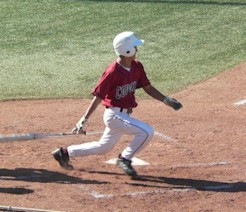 "Making quality pitches when it counted," was Reed's response when asked about how he recovered from his first inning struggles, "The defense played solidly behind me."

It also helped that Reed started throwing strikes in the second inning. Unofficially, he had an interval where he threw 20 out of 26 pitches for strikes.

The Highlanders took the lead in the third when a single by Brennan Ingram scored Mauro Olivarria to make the score 2-1, Helix. Califano had been struggling with a high pitch count, but limited the Cougars' deficit to one run before leaving the game after three innings.

It was in the fifth inning that the Highlanders' bats came alive. Romello Carbuccia hit a two-run single to break the game wide open. Ray Peterson and Reed each hit doubles that sent runs home. The five run inning put the Highlanders in control with a 7-1 lead. 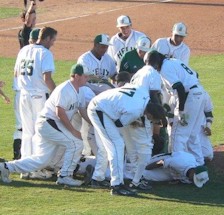 In spite of facing a huge deficit, the Cougars were determined not to go down without putting up a good fight. In the top of the seventh inning, Jesse Jenner and Garrett Gandolfo each hit RBI singles against an obviously tired Reed. Helix was still ahead 7-3 and with two outs, head coach Cole Holland left Reed in to close out the game.

So far in the inning, Reed had given up a walk and three straight singles, making the decision to leave him in somewhat risky. The next batter, Wes Judish, was hitless, but he did bat in the game's first run with a sacrifice fly in the first inning and was anything but an automatic out.

In spite of running on vapors, Reed found the strength he needed to strike out Judish and end the game. Helix players piled up in the middle of the infield to celebrate their CIF title.

"I'm exhausted, but so happy right now," Reed commented, "my arm could fall off and I wouldn't care."

The Cougars' season ends with their record dropping to 20-14. They beat La Costa Canyon two out of three times and Bonita Vista twice to get to the championship game.

The Highlanders improved to 25-9 with the win. They had previously beaten Scripps Ranch and had to beat Valhalla twice in the earlier rounds of the playoffs before making it to the championship game.

Christopher Mohr is a freelance writer in the San Diego area and is a huge Chargers, Padres and Red Wings fan.