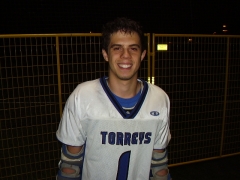 Both games were close and would not be decided until the final seconds. Duke University held on for a 61-59 win over Butler University after a last second shot by Butler's Gordon Hayward failed to go in. Similarly, the Torreys held on for a 7-6 win after surviving a last-ditch effort by the Eagles to tie the game in the last few seconds of regulation.

The aforementioned basketball game, along with the chilly weather and the fact that school was not in session at Country Day all contributed to reduced attendence at this game. Only the most diehard of lacrosse fans showed up, and they were rewarded with an exciting, dramatic game. 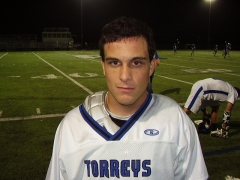 It took only 50 seconds for Granite Hills to get on the board when Brian Smart scored the first goal of the game. Only 22 seconds later, Mat Lepper added a second goal for the Eagles. Before the Eagles could recover from the sting of giving each other high-fives, the Torreys got on the board with a goal by Jason McCallum. The quick pace of both offenses had fans wondering which would reach the twenties first: the score or the temperature.

The temperature gained the early advantage as both teams tightened up their defenses and would not allow any more scoring in the quarter, which ended with the Eagles leading 2-1.

Country Day took over in the second period, by scoring three goals. Two of the scores came from Guito Olortegui while his teammate, Aidan Kennedy, added another. Joe Cardona scored for Granite Hills, allowing the Eagles to stay within one goal at halftime, down 4-3.

The Eagles had the early momentum in the third quarter when Lepper and Cardona scored goals, allowing Granite Hills to retake the lead, 5-4. The momentum shifted back to Country Day when the Torreys responded with a pair of goals from Jake Hamilton to take a 6-5 lead at the end of the third quarter.

The fourth quarter did not start well for the Eagles. Just 38 seconds elapsed before Olortegui scored another goal to give the Torreys a 7-5 lead. In a relatively low scoring game like this, a two goal lead proved challenging to overcome.

That wasn't apparent to the Eagles. They still had a lot of fight in them and there was still a lot of lacrosse to play. Cardona scored with 7:45 left in regulation, allowing the Eagles to close to within one goal, down 7-6.

Country Day's defense, which tightened up considerably after Granite Hills' first two goals of the game, became even more stingy after Cardona's goal and would not allow the Eagles many scoring opportunites for the remainder of the game.

Granite Hills would have one last scoring opportunity when the Eagles had possession and called a timeout with 42 seconds left in regulation. They regrouped to set up a last second scoring play, hoping to tie the game and force an overtime period.

Unfortunately for Granite Hills, the play did not work out the way it was drawn up during the timeout. The Eagles only got one shot off, and that one went wide of the goal. The Torreys gained possession with 18 seconds left and were able to kill the clock and get the win.

Olortegui had a hand in four of Country Day's seven goals, finishing with three goals and one assist. "I felt we had good offensive possessions; we tried to limit our mistakes. Our clearing wasn't as good as we wanted it, but our offensive possessions were good. We were fairly solid on [defense], we had absolutely great goalie play by our goalie, David Farley, and I think we got good breaks; it was a fairly even game. Granite Hills was good competition and I'm glad we got the win."

Country Day's goalie David Farley felt that the defense played a big role in the win. "Defensively our goal was definitely keeping people off the crease, stopping the kind of garbage goals, the little put-ins, making them shoot outside. That's really the strength of our defense."

Cardona led the scoring effort for the Eagles with three goals and one assist.

Christopher Mohr is a freelance writer in the San Diego area and is a huge fan of the Padres, Chargers and Detroit Red Wings