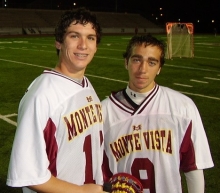 The Monarchs gained the early lead on two unassisted goals by Matt Parris, whose breakaway speed proved to be troublesome to Santana's defense. Although Matt Doyle's goal at 6:48 in the first quarter got Santana on the scoreboard, Jesse Torres scored a goal only a minute later and the Monarchs had a 3-1 lead at the end of one quarter.
The second quarter turned out to be much like the first. Although Roy Richards scored for Santana just 44 seconds after the quarter started, the Monarchs responded equally quick with a goal from Dre Sanchez. His brother Aron, fought through a crowd of Santana defenders to score the team's fifth goal, while Luke Minton scored another to give the Monarchs a 6-2 lead at halftime.
There's no way to know exactly what was discussed at halftime between the Santana coaching staff and the players, but you can be pretty sure that the topic of coming out strong in the second half came up.
The Sultans appeared to have taken the message to heart by scoring the next three goals to close the deficit to 6-5. Kyle Baird scored two goals while Richards added another. Equally important is that the Sultans' defense tightened up and shut out the Monarchs in the third quarter.
The tightening up of Santana's defense led to the game becoming more physical and escalating to the point of a near fight with 2:41 left in the third quarter. Officials restored order and called simultaneous one minute, non-releasable penalties on Minton and Santana's Tim Schultz.
Monte Vista took advantage of a mistake by Santana goalie Cody Smith. Dre Sanchez intercepted a clearing pass that Smith launched from behind the goal and scored an easy goal with what amounted to an empty net. Monte Vista's lead was 7-5 with 8:53 left in regulation.
Although Santana was down but not out at this point, any hope of a comeback ended when Dre and Aron Sanchez scored goals just 15 seconds apart to give the Monarchs a 9-5 lead. With 5:41 left in regulation and a four goal deficit, tying the game was highly improbable for the Sultans. Each team scored a goal to close out the scoring, making the finally tally 10-6, Monarchs.
Dre Sanchez led the way with three goals and 12 ground balls for the Monarchs. Richards led the scoring for Santana with three goals while teammate Sammy Rosas had seven ground balls.
Monte Vista improved to 4-5 with the win; Santana dropped to 3-8.

Christopher Mohr is a freelance writer in the San Diego area and is a huge fan of the Padres, Chargers and Detroit Red Wings