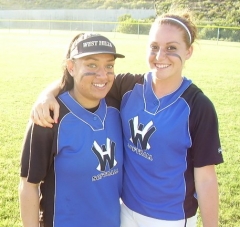 May 7, 2010 (Spring Valley) - Micherie Koria hit a grounder in the top of the eighth, driving home what proved to be the winning run in West Hills' 2-1 victory at Steele Canyon High School Friday afternoon. Pitching and defense dominated this game, making runs hard to come by and the slightest sign of offense a dramatic event.

Both starting pitchers, Noelle Johnson for West Hills, and Lorena Klopp for Steele Canyon, each threw complete games while dominating opposing hitters. Neither pitcher faced more than five batters in any inning.

Any similarity between the two pitchers ended right there. Klopp's approach was to blow away hitters, as clearly demonstrated by her total of 14 strikeouts. Johnson, on the other hand, got 13 outs by inducing ground balls. It is often the case that strikeout pitchers throw more pitches than ground ball pitchers do, and this game was no exception. Klopp threw 157 piches while Johnson only threw 114.

The peskiness of the Wolfpack hitters played a big part in Klopp's high pitch count. Many batters went deep in the count by taking pitches and fouling off others. Although they struck out frequently, Wolfpack hitters also drew four walks. It may not sound like much, but in a low scoring game like this, every baserunner was golden.

The Cougars scored first with a run in the third inning when Amanda Hartnett walked and later scored on a ground ball single to center field by Michelle Beasley. Hartnett's free pass was followed by another to Klopp, putting Hartnett in scoring position for Beasley's hit.

West Hills tied the game in the sixth with a run manufactured by Faith Koria, Micherie's twin sister. Faith, batting left-handed, took a running swing at a 1-1 pitch, hitting it up the third base line for a single. She then stole second and scored on a two-base error when the throw from the catcher, Molly Hutchison, went into center field.

"When I'm on base, I'm looking for the steal [sign] from my coach, I'm just trying to win the game," Faith said about manufacturing runs.

The game went into extra innings, tied 1-1. In the top of the eighth inning, Faith Koria would again manufacture a run for West Hills. With one out, she drew a walk and stole second. A single by Kaeli Hunyday moved Faith over to third base. Micherie Koria then hit a grounder to second base, but the only play was at first, thus allowing Faith to score the go-ahead run.

The bottom of the eighth was relatively uneventful for Johnson as she retired the Cougars in order to preserve the win for West Hills. Recent games have given Johnson an appreciation for a hard fought win:

"Lately we've been playing a lot of extra innings and it's come down to like the last pitch, the last out is always crucial. Every play is big," Johnson said about the recent string of close games, "It doesn't ever get normal, the pressure is always there."

Christopher Mohr is a freeelance writer in the San Diego area and is a fan of the Padres, Chargers and Detroit Red Wings.

I love playing tennis and volleyball..Its a great sport our body will be more healthy..we cannot easily catch up some flue's.. Great post!!

ave you ever considered adding more videos to your blog posts to keep the readers more entertained? I mean I just read through the entire article of yours and it was quite good but since I’m more of a visual learner,I found that to be more helpful well let me know how it turns out! Big thanks for the useful info i found on
Second Mortgages Canada

I love to play tennis... I used to play this game during my school days.
scrabble cheat word finder

I'm in the high school tennis team, and i wear sometimes the school top and any sports shorts, or maybe tennis skirt and singlet. In the end, it doesnt really matter what you wear it just needs to be clothes you can move in and feel comfortable in.
betsson casino

Congrats girls. Best of luck to your future. Awesome blog. I enjoyed reading your articles here.

post congrats Faith and Noelle. Wish i could play as you ladies :P

Thanks for the tips, maybe I can use this svelte my noesis marketing and I've been use whatsoever ethnical media in try a interaction and they eff handiwork a big friendliness on me.popular greenhouses

We pauperization to adopt predestined rules and regulations to desist these kinds of situations, thanks.
SizeGenetics