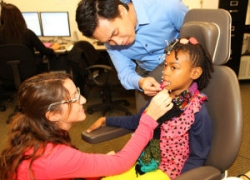 December 20, 2012 (San Diego)--In a speech, language and hearing sciences research lab at San Diego State University, children with cerebral palsy and those who are typically developing are experiencing a certain kind of fame.

“No one has looked at the speech movements of children with cerebral palsy using this technology,” Nip said. “We can use this information to help speech-language pathologists understand how to help their clients communicate better.”

Nip, along with student research assistants, is performing speech and language testing on children between the ages of 1 to 18 years old. It’s all made possible because of a three-year grant worth nearly $450,000 from the National Institute on Deafness and Other Communication Disorders.

The research lab is similar to a movie set. Eight cameras cross two walls, all focused on the seated participant. Approximately 15 reflective markers are placed on the child or adolescent’s face, including the lips and jaw. Those markers reflect infrared light that is picked up by the cameras. This information is then sent to a computer that turns the data into a 3-D image of the participant’s face, similar to what you would see on an animator’s computer in a major film studio.

To examine participants movements during speech, different words and phrases are displayed on a projection screen in front of them. They are asked to read and repeat the words and phrases so that Nip and his research team can collect and analyze their movements.

Originally, Nip anticipated 15 participants with cerebral palsy and 15 who are typically developing. The research has received such a positive response that Nip has increased both participant goals to 50.

Six student researchers work with Nip in his lab, three graduate students and three undergraduates. It’s an experience that SDSU senior Lucia Kearney is grateful to have.

“I started out doing data analysis in Dr. Nip’s lab, but I never expected to have the level of knowledge and involvement that I have gained working with him,” said the speech, language, and hearing sciences major. “He is truly passionate about his research and has been a great mentor.”

The students work as clinical lab assistants. They participate in the data collecting processes, work with participants one-on-one and analyze results.

Nip said the research lab provides the students with valuable skills, especially for those who will go on to work in a clinical setting.

Many people with cerebral palsy, a motor disorder that can affect the entire body, have difficulty speaking.

“Researching mouth movements in both groups will help us understand the underlying cause for speech difficulties in children and adolescents with cerebral palsy,” Nip said.

Nip said, “The research helps us understand how well children with cerebral palsy are understood by listeners, so that we can create more effective speech therapy techniques and help them become more effective communicators.”

San Diego State University is the oldest and largest higher education institution in the San Diego region. Since it was founded in 1897, the university has grown to offer bachelor's degrees in 89 areas, master's degrees in 78 areas and doctorates in 21 areas (Ph.D., Ed.D., Au.D., and DPT). SDSU's approximately 31,000 students participate in an academic curriculum distinguished by direct contact with faculty and an increasing international emphasis that prepares them for a global future. For more information, visit www.sdsu.edu.