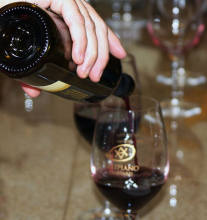 August 30, 2017 (Highland Valley) -- Wines from Altipiano Vineyard and Winery, Escondido, received double-gold, silver, and bronze medals out of 4,300 entries from more than 30 countries around the world at the 37th San Francisco International Wine Competition held June 29 to July 2, 2017.

Altipiano Zinfandel 2015, with 96 points, was one of only 282 entries that received a double-gold medal. The winery’s Sangiovese 2015 received silver; and the Barbera Estate a bronze.

Altipiano winemaker Denise Clarke said, “We are proud to represent Highland Valley, an up and coming wine-producing region in San Diego County. We join fellow Highland Valley winery, Domaine Artefact, whose wines also received three silvers and a bronze at the San Francisco International Wine Competition and a Gold, Silver and Bronze at the Sunset International Wine Competition.”

Denise is one of 20 female winemakers in the San Diego region. She and her husband planted their first vines in 2008, and she released her first wines in 2012. She approaches winemaking as a conductor of an orchestra—of  “the music of wine.”

Watch for Altipiano in the October/November 2017 issue of SOMM Journal.

Altipiano Vineyard and Winery can be found in the Highland Valley Region of San Diego County between Ramona and Escondido, Calif. Winemaker Denise Clarke co-owns the winery with husband Peter. Located at 20365 Camino Del Aguila, Escondido, CA 92025, the Altipiano tasting room hours are open for tasting on Friday/Saturday/Sunday, noon to 6 p.m. For additional information, go to http://www.altipianovineyard.com.