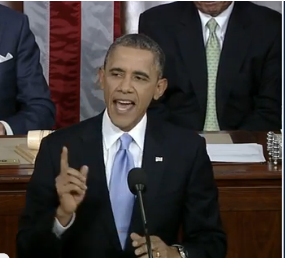 January 29, 2014 (Washington D.C.) -- President Barack Obama delivered his State of the Union address on Tuesday with a theme of “opportunity for all.”  He pledged to make this a “year of action” to restore the promise of American and opportunities for every American.   View the full video here, or scroll down for highlights.

The President said that after four years of economic growth, corporate profits and stock prices have rarely been higher and those at the top have never done better – but average wages have barely budged, inequality has deepened, and upward mobility has stalled.  “The cold hard fact is that even in the midst of recovery, too many Americans are working more than ever just to get by—let alone get ahead. And too many still aren’t working at all,” he said.

He then laid out a set of goals to speed up growth, strengthen the middle class, and build new ladders of opportunity into the middle class. His goals include executive actions he plans to take as well as other actions that would require Congressional approval.

He announced a summit on working families to build a 21st century workplace, as well as launch of four new manufacturing institutes. Other plans include asking the Vice President to review the federal job-training system and propose improvements and partnering with leading CEOs to help the long-term unemployed.  He also called on Congress to extend unemployment benefits that recently expired for the long-term unemployed.

He called for expansion of the earned income tax credit for workers, as well as removing some retirement tax breaks for the wealthiest Americans while improving breaks for the middle class.

President Obama also said he will soon announce new philanthropic partnerships with companies like Apple, Microsoft, Sprint and Verizon to improve technology in schools, along with plans for expanding access to preschool and college opportunities.

He announced plans to create myRA accounts or starter savings accounts to help Americans save for retirement. Like savings bonds these would be backed by the U.S. government.

He called on Congress to pass the Paycheck Fairness Act to provide workplace equality for women and to also extend protections for workers from workplace discrimination based on sexual orientation.

He called for cutting red tape for infrastructure investment on projects ranging from roads and bridges to renewable energy projects, partnering with states and cities on energy efficiency and clean power initiatives, setting new energy standards for oil and gas drilling on public lands

The President emphasized the need to address climate change.

A White House briefing paper revealed plans to expand renewable energy to 20,000 acres of public lands.  However the President suggested some limits on where these may be sited, stating, “I’ll use my authority to protect more of our pristine federal lands for future generations.”

The President also seeks to open new markets for American clean energy manufacturers and to expand SelectUSA to bring more jobs back to America  and closing loopholes for companies that ship jobs overseas.

He renewed his call to fix what he calls our broken immigration system.

He also called for securing a safe and sound housing financing system, ending Fannie Mae and Freddie Mac as we know them to  quote, “turn the page on an e4ra of reckless lending and taxpayer bailouts.”  He pledged tod build a new housing finance system that will provide secure homeownership for responsible middle class families and those striving to join them, and indicated he has some bipartisan support from key Congressional leaders on this concept.

He also spoke about the Affordable Care Act and challenged Republicans opposed to the plan to come up with a specific plan to cover more people and increase.  “But let’s not have another forty-something votes to repeal a law that’s already helping millions of Americans,” he said. “We all owe it to the American people to say what we’re for, not just what we’re against.”

The President called for Congressional action to strengthen the Voting Rights Act following a Supreme Court decision that weakened a key provision.

Turning to international issues, he noted that when he took office, nearly 180,000 Americans were serving in Iraq and Afghanistan. Today all U.S. troops are out of Iraq and half have returned from Afghanistan, where the President said our mission will be completed by the end of this year and America’s longest war will finally be over.

Yet he said danger remains from Al Qaeda, so America must remain vigilant in pursuing terrorist networks.

But the President also said he is working with congress to reform surveillance programs under the NSA because, he stated, “the work of our intelligence community depends on public confidence, here and abroad, that the privacy of ordinary people is not being violated.

He cited additional challenges ahead, such as making sure that Iran does not develop a nuclear weapon.

Our freedom and democracy have never been easy, the President said, then repeated his goal to create improve opportunities for all Americans as well as assuring justice, fairness and equality under the law.   But he concluded, “If we work together, if we summon what is best in us, with our feet planted firmly in today but our eyes cast towards tomorrow—I know it’s within our reach.”