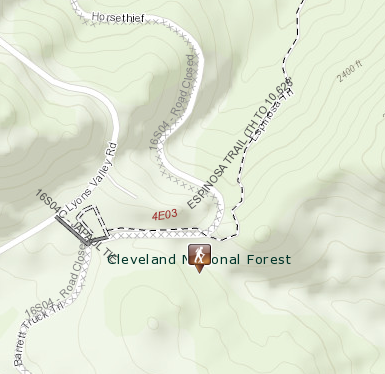 September 22, 2018 (Jamul) – Cal Fire responded to a 911 all reporting a hiker in distress on a trail near Horse Thief Canyon off Lyons Valley Road near Jamul today. When they arrived, he was not breathing. Cal Fire personnel and Mercy medics attempted lifesaving measures, but could not revive him.

Due to the rugged terrain and heat, the Sheriff’s ASTREA helicopter responded to recover the body in coordination with the County Medical Examiner.

The Medical Examiner is contacting relatives of the deceased and will provide additional details, according to Deputy R.E. Phillips.

ECM has asked Cal Fire to clarify what time the 911 call came into dispatch and how long it took for emergency personnel to reach the scene.

Horsethief Canyon is located within Cleveland National Forest. The area got its name from thieves who formerly smuggled stolen horses south over the Mexican border.