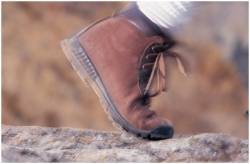 Contributing conditions include a history of anhidrosis (or lack of sweating) and coronary artery atherosclerosis, the Medical Examiner reports.

The tragedy serves as a reminder that if you hike in the backcountry, be sure to carry plenty of water.  Hike with a friend if possible, carry a cell phone and a whistle to summon help if needed, and make sure someone knows where you are going and when  you are expected to return.