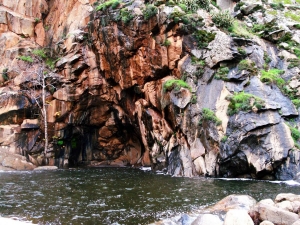 Third major injury in a week at East County waterfalls

February 13, 2011 (San Diego’s East County) – A 24-year-old woman fell from a rope swing at Cedar Creek Falls and broke her leg this afternoon. San Diego Sheriff’s personnel launched a rescue at the popular East County swimming hole near Ramona, which is bordered by steep canyon walls in the Cleveland National Forest.

A Cal-Fire rescue specialist was lowered by hoist from the helicopter to the victim’s location near the falls. She was secured in a rescue basket to immobilize her during transport and hoisted into the chopper for transport to a Julian Sheriff’s substation, where medics continued her treatment. 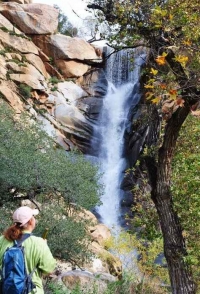 The incident was the third serious injury in a week at East County waterfalls, which have increased in popularity due to hiking sites on the Internet. This weekend, a rock climber died at nearby Mildred Falls after becoming entangling in a rope and suspended upside down beneath 30 degree water in the falls. On February 6, a woman tumbled head over heels at Three Sisters Falls, breaking her arm.

Sheriff’s officials have told East County Magazine that the highest number of rescues annually occur at Cedar Creek Falls, where the Cedar Fire burned off much of the vegetation in 2003. Many hikers fail to bring enough water for the grueling hike, which has virtually no shade for the afternoon hike out. Dogs have also succumbed on the steep trail. Injuries and even deaths have occurred at Cedar Creek Falls, most often from diving accidents or people who get too close to the precipice and tumble over the falls.

The rope swing has long been popular with visitors, the vast majority of whom have used the rope swing without injury.