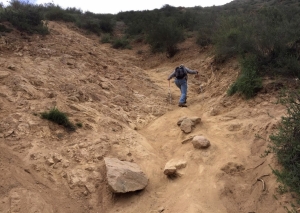 Photo:  The trail out to and back from Three Sisters Falls is steep and often slippery.

April 19, 2017 (San Diego's East County) - San Diego County’s bountiful rainy season led to a wildflower super bloom in the deserts and cascading waterfalls in our mountains, each drawing a flood of visitors. Some of these hikers have been unprepared for the strenuous activity and became sick or injured. That’s resulted in a slight uptick in rescues or medical assistance, CAL FIRE and the San Diego Sheriff’s Department report.

In the first three months of this year, they have had 10 rescues along the Cedar Creek Falls and Three Sisters Falls trails in the Cleveland National Forest between Julian and Ramona. There were also two rescues out of Palm Canyon in the Anza-Borrego Desert State Park, one of which was for a snake bite victim. Most of the calls are fatigue, heat-related injuries or sprained ankles, but there are also some broken bones or serious injuries from jumping off a waterfall or falling, said Sheriff’s Sgt. Mark Johnston.

“It could cost you your life if you’re not prepared,” said Johnston, who coordinates hoist rescues as part of the Aerial Support to Regional Enforcement Agencies (ASTREA) unit with Search and Rescue and CAL FIRE. In recent years, two teenagers have died of heatstroke after hiking to the falls. Additionally, many dogs have also succumbed to heatstroke.

In response to the recent high number of hikers, last weekend the San Diego County Sheriff’s Department Search and Rescue volunteers staged a medical aid station a half mile in from the Cedar Creek Falls trail start from Ramona Oaks, said Frank Motley, Commander for the Sheriff’s Search and Rescue Reserve Unit. The medical aid station is staffed by volunteers including at least one with emergency medical technician credentials to try to assist any hikers already in distress as they are trying to make the strenuous climb back out. The medical aid station is planned to continue through late April.

“We are actually staging medical teams out on the trail, about half a mile down. They have a pop-up tent and basic medical supplies to handle dehydration, blisters, and minor injuries,” Motley said. “The advantage of this strategy is that we hope to mitigate the calls to ASTREA by triaging patients and treating them while the incident is still minor.”

Motley said they treated several patients over the weekend, but did not have an exact count.

His top advice to hikers is to “be prepared for the environment you are tackling.” He said they often see people wearing flip-flops and bringing along small children or dogs on the hike, which is difficult. He compared it to being on a stair climber at the gym for two solid hours.

At Cedar Creek Falls, hikers must obtain a visitor use permit which covers up to five people, and usually only 75 permits are issued a day. However, permits are not required for Three Sisters Falls, which is not an official trail, but rather one that has been carved out by hikers.

“Recently, I’d say Three Sisters is where we’ve had more rescues because the trail is more rugged. It’s a harder trail,” Johnston said.

Hikers need to consider the remote terrain and avoid taking any chances that might lead to injury or illness.

“Just by nature, people are going out there because it’s in the middle of nowhere and it’s beautiful, but once they’ve committed to going down the canyon or up the trail, be aware that it will take us some time to get to them if something goes wrong. We can’t get there as quickly as we can if it’s a medical distress on the side of a road,” said CAL FIRE Capt. Issac Sanchez. “Our main goal is to prevent an incident like that, and to do that, the public needs to heed the warnings and make sure they’re equipped to go out there – not only with the clothes and gear they have, but also physically prepared.”

Sanchez said at first the difficulty of the hike might seem misleading because it’s all downhill, but it’s a long walk back out mostly in steep terrain that sometimes requires hikers to go down on all fours to climb out. The U.S. Cleveland Forest Services does not recommend using the hiker-installed ropes because they may not be properly installed and may not support a person’s weight.