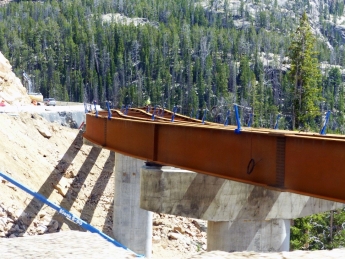 November 5, 2021 (Washington D.C.) – The House of Representatives tonight approved the $1.2 trillion bipartisan Infrastructure Investment and Jobs Act by a 228-206 vote. The landmark bill previously approved by the Senate 69-30 now heads to President Joe Biden, who has pledged to sign it into law.

The bill marks the most significant investment in the nation’s infrastructure (including roads, bridges, railways, power grid and internet upgrades, disaster responses, and replacing lead water pipes), since Roosevelt’s New Deal after the Depression in the 1930s.  It will fund major infrastructure projects – also putting people to work – in all 50 states.

The measure addresses almost all of the 17 categories identified in the American Society of Civil Engineers’ 2021 Report Card on America’s Infrastructure, which gave the nation a C- grade.

Dennis D. Truax, president of the American Society of Civil Engineers, hailed passage of the Infrastructure Investment and Jobs Act for “fulfilling President Biden’s vision with a historic piece of legislation that will have monumental impacts on the economy, public safety, global competitiveness, and each America’s well-being.  Passage of this five-year, $1.2 trillion bill proves once again that the country can lead with infrastructure.”

He adds, “With this legislation, the federal government will restore their critical partnership with cities and states to modernize our nation’s roads, bridges, transit systems, drinking water pipes, school facilities, broadband, ports, airports and more. Without a strong federal partner, local projects that are community lifelines have hung in the balance, oftentimes being paused or outright cancelled due to funding uncertainties. When this happens, American households and businesses are the ones who pay the price.

The IIJA is the culmination of decades of advocacy by  American Society of Civil Engineers (ASCE), he notes, adding, “We commend the House for joining the Senate in prioritizing American communities by passing this bipartisan infrastructure legislation and we are encouraged that President Biden has indicated he will sign the bill quickly to ensure our communities receive these long-awaited resources soon, allowing critical projects to move forward.”

The 228-206 House vote included all but six Democrats in favor, along with 13 Republicans. The six progressive Democrats voted no as a protest over decoupling a vote on the measure from the separate Build Back Better bill, an even larger social spending package. Of San Diego's five Congressional representatives, the four Democrats (Sara Jacobs, Mike Levin, Scott Peters, and Juan Vargas) voted in favor and Republican Darrell Issa voted against.

Congresswoman Sara Jacobs, whose district includes part of East County, was part of the team that negotiated the final agreement on the vote series Friday night. She indicates the bill will create 2 million jobs over the next decade.

“I’ve said from the beginning of my term that we need a recovery that serves all Americans: we need to rebuild and upgrade our infrastructure, and we need to invest in families and kids," she said in a prepared statement. “I was proud to work with my colleagues in the Progressive Caucus and Democratic House leadership tonight to make sure our plans for the entire Build Back Better agenda move forward. After a long day, I’m grateful that we advanced the Infrastructure Investment and Jobs Act to the President’s desk with a bipartisan vote and made significant progress toward passing the Build Back Better Act."

Jacobs adds, “I was elected in the middle of this pandemic, and my constituents sent me here to make progress for San Diego and to build a recovery for all of us. Now that the infrastructure bill has passed the House, our top priority and focus is getting the Build Back Better Act across the finish line. The investments in these bills will be life-changing for hundreds of thousands of families and workers in my district, and I’m honored to be doing this work on their behalf.”

Congressman Juan Vargas, whose district spans the southern part of the county including East County's border areas, tweeted, "I’m proud to have voted for a bill that creates millions of good-paying jobs with a once-in-a-century investment in infrastructure, such as, roads and bridges, clean drinking water, wastewater systems and broadband, for our communities and our nation."