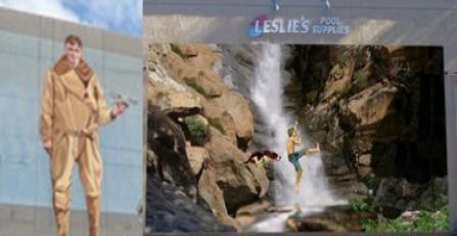 May 16, 2016 (Ramona) – The Ramona H.E.A.R.T. Mural project has already brought seven beautiful murals commemorating Ramona’s history to this town nestled in the mountains of San Diego’s East County.  Soon, two more murals of epic significance will be on display, thanks to a recent vote by Ramona’s Design Review Board approving the projects.

The mural of famed aviator Charles Lindbergh formerly on a building at Lindbergh Field in San Diego has been donated by the artists, John and Jeanne Whalen, to the Ramona H.E.A.R.T. mural project. The artists spent eight months restoring the landmark mural after San Diego’s airport removed it and stored it in a warehouse.  The restored mural’s new home will be on the outside of the Masonic Lodge in Ramona, chosen because Lindbergh was a mason and the lodge’s building is large enough to fit most of the mural, though it will need to be trimmed down at the bottom.

The second new mural approved by Ramona’s Design Review Board is titled “The Ole Swimmin’ Hole.”  Created by artist Thom Guerra in the style of Norman Rockwell, it will depict a boy and his dog jumping into the natural pool at the base of Cedar Creek Falls.  Appropriately, the 28 by 17 foot mural will grace the exterior wall of Leslie’s Pool Supplies on Main Street, the Ramona Sentinel reports.

The image captures the nostalgia of a bygone era, since leaping into the pool at Cedar Creek Falls is now banned, following several fatal accidents that occurred at the still-popular swimming destination.

Guerra , a Lakeside resident and El Cajon native, has done many other prominent murals in East County, including a large mural at the Olaf Wieghorst Museum recreating one of the Western artist’s works.  His historic murals can be seen along Main Street in El Cajon, plus, you can find more of his artistic creations along the San Diego River Park and Walker Preserve in Lakeside.