May 5, 2021 (Lemon Grove) – May is National Preservation Month. The Lemon Grove Historical Society invites you to take a stroll around town to visit Lemon Grove’s beloved preserved historic structures.

Start by touring the Parsonage Museum Saturdays from 11 a.m. to 2 p.m. (Photo, above left). Built originally in 1897 as the First Congregational Church of Lemon Grove, this Redwood Folk Victorian was built by volunteer ranchers under guidance of Rev. Isaac Atherton for $912. A one-story wood structure with porch, it was added onto in 1911, becoming a two-story parsonage and moved one block west on Church Street to its present location to make way for a larger church. 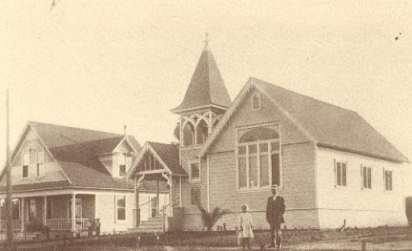 The steeple was removed about 1915.  In 1994 the City of Lemon Grove purchased the property and LGHS, led by Helen Ofield, rescued the decaying church, rehabilitating it as the Parsonage Museum of Lemon Grove. The rescue won the 2001 Governor's Historic Preservation Award. The museum opened with one gallery on Sept. 26,1999 and continues to be operated by LGHS today. 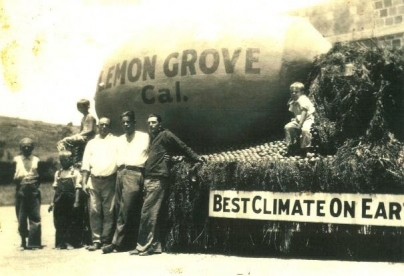 Next, head over to the Big Lemon at Main and Broadway.  This beloved monument of civic folk art is made of plaster, timber and chicken wire. It was built by volunteer ranchers and debuted as a parade float on July 4, 1928 in downtown San Diego. It carried the first Miss Lemon Grove, Amorita Treganza and her six princesses. 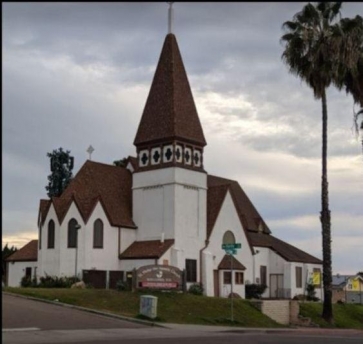 The Big Lemon served as an annual float until 1932 when it was placed on a plinth on Main Street parallel to old Imperial Avenue (now Lemon Grove Avenue) close to its present location.

Another historic site is the Grove Pastry Shop at 3308 Main Street. Built by Dr. Charles Good, a local citrus grower and dentist, this Mission Revival Building stands at Main and Pacific, the site of the town's original general store built 1891 and burned down in 1906. A temporary store built in 1907 and operated until the 1912 shop was built.  The building was leased by the sons of Anton Sonka, who operated Sonka Brothers Store until 1945 when the business was sold and renamed the Lemon Grove Market. Subsequent use was an auto parts store and a waterbed store.

The Grove Pastry Shop moved there in 1980, operating until 2016. This venerable building is the oldest continuously operated commercial building in town.  The building is the site of the Lemon Grove History Mural along the side of the building – a must-see attraction depicting Lemon Grove from its first Native American residents through pioneer times to the present day.

St. Philip the Apostle Church, a Gothic-style structure built in 1887, may be the most traveled church in the county. It was built in San Diego at 8th and C Street, later moved near SDSU and then again in 1970 to its present location at 2660 Hardy Drive in Lemon Grove.  Parishioners fully restored it after a devastating fire in 1972.  It is the oldest continuously operated Episcopal church in the county. 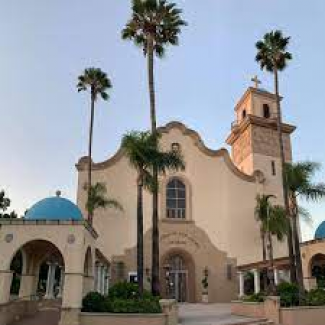