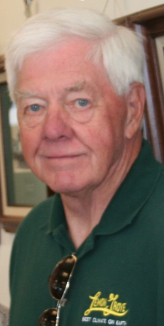 September 30, 2013 (Lemon Grove) – The "History Alive" lecture series, sponsored by the Lemon Grove Historical Society, will continue on Oct. 3 at 7 p.m. in the H. Lee House Cultural Center, 3205 Olive, Lemon Grove.  Jack Shelver, the city's first city manager, will look back at the heady days of early cityhood in 1977.

Jack, who retired to Julian in 1994, where he serves as president of the Fire Board, spent 17 years as Lemon Grove's chief executive.  He oversaw the coming of the trolley and the recreation of the original train depot.  He also oversaw the building of the Senior Center, launched redevelopment, and established the first General Plan.

Long recognized as a distinguished city manager, Jack has been described as a witty raconteur with virtually total recall of people and events.  According to the Lemon Grove Historical Society, those attending should expect a colorful, anecdote-laden reminiscence.

Refreshments will follow the free presentation, which is suitable for ages 13 and over.  For more information, those interested should call 619-460-4353.