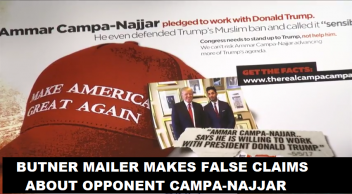 It also has a photo taken before Donald Trump’s presidency, when Campa-Najjar says was working with the Hispanic Chamber of Commerce, to falsely position Campa-Najjar as a Trump supporter when in fact, he has been a vocal opponent of a wide range of Trump’s policies.

The mailer misquotes an article in Breitbart. The article clearly stated Campa-Najjar disagreed with some Trump policies including Trump’s ban on all immigrants from seven Muslim nations.

In interviews with East County Magazine on our radio show, both candidates previously made statements on immigration.

He told us, “My father came to this country after his parents were killed in front of him, at the age of 11,” he said, adding that his father chose to reject radicalism and come to America “and thank God America chose him.”  His father came on a student visa, started businesses here and had two successful sons. Campa-Najjar said his family has lived “that American miracle” that he knows many others aspire to achieve.

In direct contradiction to what Butner’s flyers later claimed, Campa-Najjar said in our earlier interview that he agreed with three federal judges who ruled Trump’s travel ban on Muslims unconstitutional.  “I am against the Islamic ban. I am against Islamophobia. I am against anti-Semitism. I am against every kind of prejudice and bigotry…including some of the rhetoric that I hear against the white working class.  I really think that a lot of them are ignored…We have to listen to them. I’ve talked to a lot of Trump voters and when I talk with them and share my values, it resonates with them.”

Ironically, while now Butner is trying to smear Campa-Najjar by falsely claiming he has been ant-Muslim, an earlier smear attempt advised the public that Campa-Najjar had a grandfather once accused of being a Muslim terrorist. That story was planted in an Israeli newspaper. Campa-Najjar counted by stating he never met his grandfather, who was never convicted of a crime, and he provided numerous endorsements from rabbis who approved of Campa-Najjar’s moderate stances on the Israel-Palestine situation that include respect toward those on both sides. It’s unknown who planted the story in the Israeli newspaper, however the Butner campaign likely had the most to gain before the primary election.

Butner voiced opposition to funding a border wall but said he would support investment in technology instead to keep America safe. He voiced support for creation of a program that would allow “responsible immigration” into the U.S., and address those already here “in a humane way.”  (Hear our interview with Josh Butner.)

Ethics is a key issue in this race, in which incumbent Duncan Hunter is under a federal criminal investigation for allegedly using campaign finances for personal use. A grand jury has been convened in the case, raising the potential for an indictment.

Patrick Malloy, a third Democrat polling far behind Butner and Campa-Najjar, twice missed appointments for interviews on our show.

Rep. Hunter has taken a hard-liner stance on immigration issues and been a staunch supporter of President Trump’s policies as one of Trump’s earliest backers. He has supported the Muslim travel ban, but backed an exception for Iraqis who helped the U.S. military.

Hunter has declined interview requests on our show. However, we did interview his two Republican opponents, who both shared their views on immigration and other issues.

Mayor Bill Wells, a Republican and mental health nurse with a doctoral degree, takes a more measured approach on immigration issues. As Mayor of El Cajon, he told us he’d seen no serious issues with immigrants and refugees in El Cajon, which has a large population of Chaldean Christians and Muslims from the Middle East as well as Hispanics. But he says he is worried about “unrestricted immigration policy” in Europe, citing Muslim “ghettos in the big cities” that have become “no-go zones” for others.

He adds, “America is a country of immigrants, the basic policy is that America is a place where you can come and seek freedom, and I like that. I think we should continue that,” but he also believes America has a “right to maintain a culture” such as encouraging immigrants to speak English and assimilate.  Wells sees a difference between extremists and others, noting that he recently gave out backpacks to Syrian Muslim refugees in El Cajon who he found to be warm and loving families.  To Wells, vetting is key to U.S. immigration policy.

Mayor Wells has been a critic of California’s sanctuary state laws. He wants police to be able to cooperative with federal immigration and law enforcement officials.  He does not see a conflict with voicing concern that authorities be able to turn criminals such as violent gang members over to immigration, while also showing compassion for immigrants who came here illegally years ago but have been law abiding and contributing to society since then. He does not believe that the U.S. should deport such people, including young people brought here as children (DACA recipients).

“Compassion should be the bylaw,” he told us, adding, “Now sometimes protecting people means setting tough boundaries, but I think we should look at each case separately and make compassionate decisions.” (Hear our interview with Bill Wells.)

Shamus Sayed is a Muslim Republican who owns a translation services business. (Hear our interview with Sayed.)

‘We need to acknowledge that we are all American and treat each other with respect,” he says, noting that he has experienced racial profiling personally.  Regarding Trump’s statements, Sayed said, “The division that’s been created is very, very disturbing.” He believes lawmakers “need to take efforts to do something about it.”

In addition to showing respect for people of all races and religions, he also believes disaffected white Americans need to be shown respect too. “They need to be fully available of the resources to them…because they are all Americans.”

I feel that the Democrats in the 50th have an obligation to leave the negative campaigning to the side. If we want to Flip the 50th, we have to have a clean, fair and square primary that doesn't split the vote. Time for Josh Butner to stop and both need to think of the November outcome. Don't spoil our chances to get Duncan Hunter out!
Thank you Miriam as always for your coverage here. Despite my efforts in getting to meet each and every one of you, I'm sure it is possible that I have missed a few :-). If any of you would like to connect directly and learn more, I would be privileged and happy to do so. My direct email is shamus@shamusforcongress.com or I can be reached at 858-375-9407 (please do leave a message if we miss you and we'll get back to you within 24 hours). - Shamus
The politic ads on television are often erroneous and cannot be fully relied on as being truthful. It seems to be the game they play - bash your opponent and win at all costs!
I received that mailer at least 2 weeks ago. There's been plenty of time to report on this before now.

so I don't receive mailers from Hunter or anyone running against him, since my neighobrhood got shifted into Susan Davis' district after the last redistricting.

I only found out because I happened to see the KPBS story and a post Campa-Najjar made about this on Facebook, both in the last couple of days. Thankfully  I happened to have interviewed both candidates in the past on their immigration views, so was able to quickly put together a a story, along with the info KPBS had.

No editor receives mailings from candidates outside their home or office addresses, unless the info is sent in some other way, too, such as via email or posted on social media. Even then, there is such a deluge of last minute election email and posts that not everything gets seen.

Many to choose from, while we attempt to figure out who's telling the truth, or just feeding us stories. Ought to be an interesting outcome.
...but no article the last two election cycles when false slime flyers were circulated about an Alpine school board candidate by Alpine slime merchants. Funny how that goes..,

Higher profile races also get priority when there are lots of last-minute mailers.

In this case, it's the highest profile race in East County, so thus the highest priority. There are a few other hit pieces floating around but we have to have time to research them first and find out whether claims are true or not.

Alpine races are often contentious with multiple candidates accusing each other of all kinds of things, and often that takes hours of research to track down what's accurate or note. Alpine has a newspaper, the Alpine Sun, which one would hope would make Alpine races its top priority.

We have, at times, waded into Alpine races to try and fact check, time permitting, but bear in mind there are many dozens of races on East County ballots and it's impossible to cover all of them in any one election.