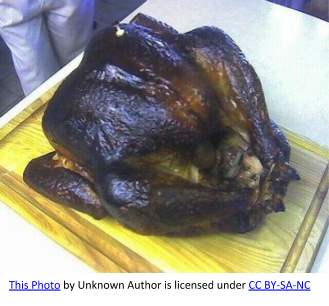 By Miriam Raftery
December 1, 2020 (San Diego’s East County) – With many families avoiding holiday gatherings due to the pandemic and restaurants closed for indoor dining, some people not accustomed to preparing a Thanksgiving feast opted to attempt cooking at home. The rush to fix multiple dishes can lead to mistakes even by experienced chefs – and inexperience can lead to outright disasters.
La Mesa resident Lori Kern posted on Facebook, “Ok, so let’s talk about our Thanksgiving dinner fails. This year mine wasn’t so bad. I blew up a cube of butter in the microwave. What did you do?"

The replies serve as a helpful list of what not to do, next time you’re cooking up a special dinner. The names have been removed to protect the guilty, but here’s a sampling of their experiences.

“My whipped cream turned into butter. I just turned away for a second, I swear.
PS: adding more cream doesn’t really help once it becomes butter.”
“I caught a cloth napkin on fire while reheating the corn bread in the toaster (stupidly wrapped in the napkin) Ugh. Small fire. Caught it quick.”
“We saw an online recipe that said cook the turkey breast-down so the juices would flow downward and keep it moist. Then you’re supposed to flip it over. On the flip, it broke in half. I got it onto the carving board but it was tilting. I carved it and just brought out the sliced turkey tray. It tasted great though, and I’m making soup stock right now with the bones. But yeah, experimenting on T Day, no mo.”
“My sweet potatoes were not cooked in time. (They took over 1 ½ hours!)  So we will have them tomorrow.”
“Under-cooked the turkey.”
“I left a stick of butter on top stove while cooking turkey. I had melted butter ALL over the stove top.”
“Added flour to gravy when it was hot; got lumps.”
“Face planted the whipped cream.”
“Can’t name names, or I’ll be killed, but someone I know made two pumpkin pies and forgot the sugar!”
“Reheated the green beans in the microwave and forgot them. Found them after dinner.”
“Made a beautifully composed salad of pomelo, avocado & pomegranate ariels and left it & the chilled plates in the refrigerator. Found them when we were putting the leftovers away.”
“Dropped a casserole of stuffing on the way into oven; the cubes which fell into the stove burner jets caused a fire and had to open up and turn on Whole House fan on the 45 degree evening. Upstairs still smells acrid But dinner was great!” 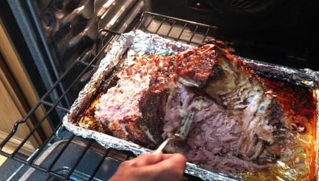 Another posted this warning from a friend, along with a photo of her holiday ham horror story.
“Tonight I learned something new!” the post reads. “Instead of turkey, I thought we’d cook the spiral cut ham that’s been in the freezer. I just bought a beautifully pineapple…and thought instead of boring brown sugar glaze, I’d add some pizzazz by adding fresh pureed pineapple. It didn’t occur to me that the enzymes in fresh pineapple (only fresh not canned) acts as a meat tenderizer which reduced the ham to gelatinous mush with gag-inducing texture. Thankfully there’s only two of us and plenty of other stuff to eat.”  (Editor’s note: a Google search for “pineapple enzyme and ham” confirms that fresh pineapple should never be added to a spiral cut ham.”
Firefighters have longed warned of the dangers of deep-frying turkeys; too much oil or dropping in a frozen turkey can result in a conflagration, as this video from the U.S. Consumer Products Safety Commission illustrates:  https://www.youtube.com/watch?v=HYvMWIvghnQ
It’s also wise to keep an eye on pets, since dogs have been known to carry off turkeys or pull off tablecloths; cats and flying birds have been known to tip over candles, igniting anything flammable nearby.
Not everyone in quarantine this Thanksgiving opted to cook for themselves.  “None this year,” one friend of Kern wrote when asked to list a cooking fiasco.  “Just a little lonely.”
With the Christmas and Hanukkah season coming up, now is the time to practice your cooking techniques – or opt to help out a local restaurant and bring in your next holiday feast.