December 7, 2009 (Spring Valley) – “The banjo is America’s own instrument,” said Carolina Bridges, director of public relations at Deering Banjo. True, and Deering is America’s banjo company—the only U.S. maker that handcrafts its instruments using all American-made parts, Bridges said during a tour of Deering’s Spring Valley factory at the company’s holiday open house on Saturday. “It’s like a good cake—we make it all from scratch.”

Deering’s attention to quality has attracted top names in the music world—not only in bluegrass, jazz and country music, but also star performers in rock and roll. But it all started right here in East County 34 years ago, when Greg and Gail Deering began making banjos in their garage, stringing instruments on their porch and selling them to local music stores. 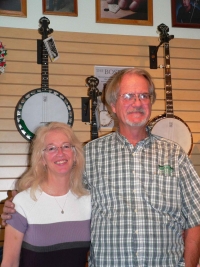 The company produces instruments ranging from a $499 “Good Times” model up to the $62,000 “Banjosauraus” model which features a head shaped like a Tyrannosaurus Rex and an entire dinosaur scene intricately inlaid into the neck. (This masterpiece is owned by George Grove of the Kingston Trio.)

“Keith Urban plays our Boston six-string. He’s mainstream. He has multiples, and he’s really popularizing banjo,” Bridges noted. “Bela Fleck, he’s won many Grammy Awards for his jazz and gospel. Garth Brooks has our Electric Crossfire…There is no music that can’t be played on a banjo.” The company makes a four-string ideally suited for Irish music and Dixieland jazz, a five-string for folk music and bluegrass, as well as six- and twelve-string versions that are easiest for guitar players to master.

“One thing we’ve discovered is most guitar players really love banjo,” Greg Deering told us. While purists consider the sound of a five-string banjo “magical”, Deering dismissed the idea that a five-string is only suited for bluegrass. “The truth is most anything can be played on a five-string, and it’s easy for a guitar player to play.”

“Up picking got a bad reputation,” Deering disclosed with a grin, finishing up a medley of Soldier’s Joy and Angeline Baby. “People would go to a dance and it was too fast, so they would throw them out.” 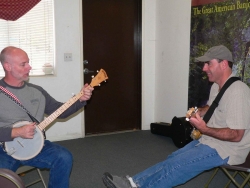 The company started a two-finger method to teach everyone to play. I tried my hand and within minutes was strumming a three-chord version of “You Are My Sunshine.”

“Most people who think they can’t play, don’t listen to music,” Deering said.

Greg had been playing in a band around town when he and Gail first began making banjos back in 1974. “I was into crafts and woodshop and making stuff,” Gail recalls.They opened Deering Banjos in Lemon Grove and moved to Spring Valley (behind the Fresh and Easy in Casa de Oro) about nine years ago.

Our tour began in the wood room, filled with parts that will be crafted into necks and fingerboards. Nearly all the work is done by hand, except for a mechanized, computerized milling machine that shapes the neck blank.

“Now it has a peg head,” Bridges said. “We cut out inlays, glue inlays in place and put frets in place. If the fingerboard is not even before the frets go in, you get a buzzing.” 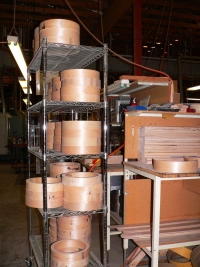 Deering uses ebony fingerboards with almond oil to preserve them and keep the wood grain moist.

The rim is the “foundational piece” of the banjo. Deering makes its own. (photo, right) The company also offers eight different tone rings ranging from steel bluegrass-style to a brass tubaphone tone ring to a grenadillo version made from the same wood used for marimbas, bassoons and clarinets.

The company makes over 100 different banjo models and continues to innovate. “Our new rims with special maple have improved the sound even more,” said Bridges, showing off a steam chambers where pieces go in on racks, with motors heated to 220 degrees. “When this is on, it’s sweet like maple syrup. It always smells like cookies in here,” she observed.

Wood strips are wrapped around flexible metal, a new technology developed in the past year, then bent around a card board frame. The innovation allows the company to keep up with fast-paced demand for its products.

Necks are hand-sanded using a small orbital sander and sandpaper. “Three guys sand the parts, spray on a finish, then sand again—several times,” Bridges said. On higher end models, the neck, peghead and heel are all one continuous piece. Once all parts are finished, from resonators to rims, they go into a set-up area. 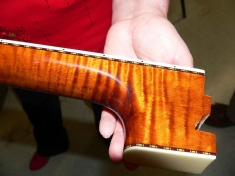 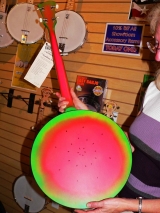 “It’s the attention to detail that makes Deering banjos so special,” said Bridges, holding up a curly maple bound fingerboard with coral snake purfling. (photo, left) Other details on Deering banjos include mother-of-pearl inlays on fingerboards and a variety of wood stains.

Some have exotic woods, such as the Gabriella ($31,000), which features a Brazilian Rosewood resonator and ornate hand carving. Others have customized inlays, such as the Texas Sequicentennial, which featured the state of Texas inlaid on the back. Deering also makes long-neck versions (popularized by Pete Seeger) and a Grand Ole Opry model signed by Greg and Janet Deering. The showroom even has a banjo made to resemble a watermelon—right down to the hand-painted seeds. (photo, right) 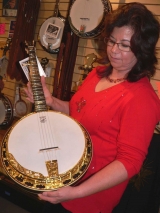 Deering has also acquired the Vega banjo line, which dates back to 1880. More ornate models include gold-plated hardware and pierced, or gun engraving. (photo, right)

Can’t afford thousands for an elaborate gold-plated banjo? Not to worry—you can get a high quality sound without breaking the bank.

“Most performing artists don’t have elaborate banjos,” Bridges confided. “It’s a tool, so it doesn’t need to be flashy. The banjo enthusiasts, God love ‘em, they’re the ones who order flashy.”

For the Deerings, hosting an annual holiday open house for guests to visit, shop, tour and try their hand at making music—all free—is just part of giving back to the community. The company also hosted a workshop series last summer, which the owners are considering repeating in the future.

“In this economy, we just felt that people need something free to have fun with,” Gail Deering concluded.

I purchased an instrument very similar to the banjo whilst on holiday in East Africa on a Tanzania safari. I still don't know the name of the instument to this day, but its great!

From several years I used to spend my favorite holidays at the Waikiki Beach, because there are some great Hawaii hotel packages. After I read this article I'm convinced that a trip to Spring Valley could be refreshing. I even hope that I could afford to buy a banjo.

I have never visited Spring Valley, but it seems like a perfect location for taking a trip. In my last vacation I managed to visit Canada. It has great hotels in Burlington vt and I wonder if this area had hotels with services as good as their neighbors from north have.