May 10, 2010 (Sacramento) – Senator Dennis Hollingsworth (R-Murrieta) whose district includes most of East County, had a hearing in the Senate Public Employees and Retirement Today on his Senate Bill 919. The measure would increase retirement age from 55 to 65 and require higher contributions from state employees to their retirement accounts. It would also require that retirement benefits be based on the highest three years of wages, instead of the highest one year.

The measure, which would reduce pension benefits while asking workers to pay more into their pension funds, has sparked controversy in Sacramento, drawing opposition from teachers and other state workers.

Hollingsworth estimates the measure would save $110 billion over 30 years. “The current pension program is unaffordable, unsustainable and it will lead to California’s fiscal ruin,” Hollingsworth said in a press statement when the measure was introduced. He said the cost to taxpayers from public employee retirement benefits has risen 2000% in the past decade. 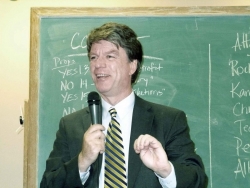 Paul Clay is the Democratic nominee running for Hollingsworth’s seat. (Hollingsworth leaves office next year due to term limits.) He called SB 919 “the pension emasculation plan” and said it will unfairly penalize workers. “He’s suggesting that after years, decades of paying in, these people should just give up their pensions. That seems grossly unfair,” he said, adding that some element s of the bill such as pension spiking (raising salary in the last year before retirement to boost benefits) have already been addressed through other means.

Clay, a teacher running on a platform of strengthening public education, added that he believes such a dramatic reduction in benefits would be detrimental to the state. “Think about the police, the firemen, the prison guards. They have tough jobs,” he said. “We’re all for putting more people in prison, but we need people qualified to watch prisoners…If we keep taking away benefits, nobody is going to want to work in these jobs.”

The measure met with mixed reactions in committee, the Los Angeles Times reports. An advisor to Governor Schwarzenegger praised the measure as “an excellent move in the direction of reducing pension promises to new employees.”

But Senator Denise Ducheny (D-San Diego) said much of the state’s pension problem was a result of Schwarzenegger not engaging in bargaining with unions representing state workers.