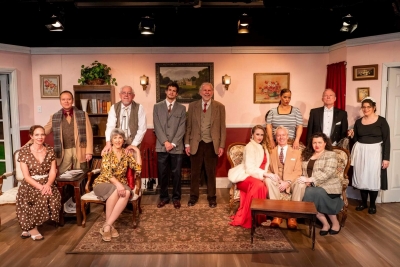 By Kathy Carpenter
Photos: Lamplighters Community Theatre
March 5, 2020 - (La Mesa) - Lamplighters Community Theatre presents "The Hollow." Everyone loves a good mystery and Agatha Christie's are some of the best. The house was full which proves my point. Why don't they do more mysteries?
When I think Agatha Christie I don't think of humor, but I had not heard of "The Hollow.”  It was quite funny, peppered with one-liners. Since this play is lesser known, it kept me guessing to the end. The play has  everything a good whodunit needs: humor, a plot that keeps you guessing, and a cast of great characters. 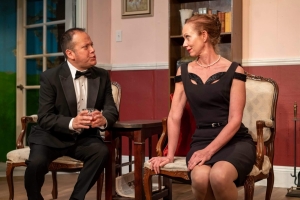 Ten characters each with unique characteristics converge for a weekend at The Hollow, a home in the English countryside. The Hollow is home to Lady and Sir Henry Angkatell, and cousin Henrietta who  lives with them. For the weekend they invite Dr. John Cristo and his wife Gerta, as well as another cousin, Midge. A third cousin Edward, who inherited the beloved family home where the cousins spent many happy times growing up, invites himself for the weekend. Love triangles abound. Throw in a starlet who moved in down the lane, a butler, and a maid, and we have plenty of interesting characters to invest in when the mystery unfolds.
One aspect I love about the old English mysteries is they always dress for dinner. I enjoy seeing everyone dressed up in their finery. Kudos to costumers Pam Strompoly-Ericson and Patty Fay on a job well done. 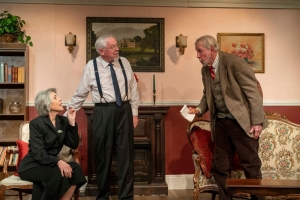 This is a four scene play with two intermissions. The first two are setting the scene, getting to know the players. With the murder coming just before intermission, it gives you plenty to talk about.  In the second act we meet the Inspector and the assistant detective.The set is the garden room of the Angkatell home about eighteen miles from London. With glass doors leading out into the huge spacious English garden, the set plays a big part of the off -tage story.
Mark Loveless, director for the mystery, assembled a killer cast. My favorite character was actually cousin Midge. I guess I could identify with her most--the relative without money who refused to take a handout. Not me at all. But a sweet, had working, care taker. ( I guess that's where I come in.) Midge was played by Michelle Burkhart, she's one of those people I've seen before and  always love her work. The audience favorite was Lady Angkatell, such a great character as the absent-minded host, played by Connie Terwilliger. Next I want to mention Frank Godinez, as cousin Edward. He always makes me laugh. Sara Bostrand portrays the starlet, Veronica Craye. For those of you that watch the new Dynasty, she was totally the new Fallon Carrington, the vixen you love to hate. I'm sure this was fun for her because she usually plays princesses at birthday parties--quite the change, so much fun. 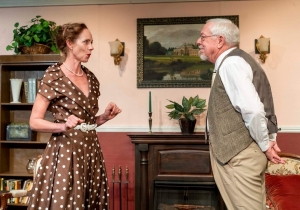 The great thing about a cast this large and community theatre is the variety of backgrounds that come together to provide us with a few hours of enjoyment. Note, this is a bit of a longer play, but well worth the time.
The cast rounds out with Lizette Kent-Allen, O.P. Haddock, Kevin McGuinness, Janet M. Taylor, Lucinda Moaney, Wilson Adam Schooley, Bud Emerson, and Richard Cajka. They provide skilled acting on all accounts.
Come join Lamplighters for an evening of laughter and mystery.
Lamplighter's Theatre February 28th - March 20th, 2020
5915 Severin Drive, La Mesa 91942
www.lamplighterslamesa.com
Up Next:
Company
Musical by Stephen Sondheim