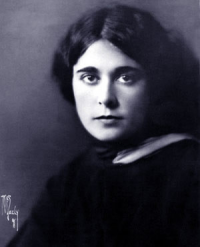 Born Frederica Sagor on July 6, 1900 in New York City, she studied journalism at Columbia University and got a job at Universal Pictures in New York.  But when “chauvistic honchos”, as she later called her bosses, refused to help her become a screenwriter, she moved to Hollywood at age 23.  There, she worked for Preferred Pictures and later, major studios including MGM, Fox and Paramount.

Her first big hit, “The Plastic Age,” scripted by Maas proved a hit success starring Clara Bow.  As a woman, Maas was most often assigned to pen flapper comedies and light dramas during the Jazz Age heyday.

She married Ernest Maas in 1927, who became her writing partner.  But after a Hollywood produced a frivolous version of her serious work about women in a 1947 musical, “The Shocking Miss Pilgrim” starting Betty Grable, Maas left the industry in disgust.  She suffered further indiginity in the 1950s, when she and her husband were interrogated by the FBI for suspected Communist activities and blackballed in Hollywood.

She later became an insurance adjuster.  Her husband, Ernest, died in 1986.  A decade ago, she moved to San Diego to be close to family, staying at Casa de Manana in La Jolla before moving to La Mesa.

At age 99, she published a tell-all book about the motion picture industry titled The Shocking Miss Pilgrim: A Writer in Early Hollywood.  She portrayed unflattering portraits of many famous Hollywood celebrities, stating that she “never met anybody” who liked or trusted producer Louis B. Mayer, for example.

Her guardian and grandnephew Tony Tovar told the San Diego Union-Tribune that Maas “was a very intelligent, very ambitious woman, and she lived the equivalent of several normal lifetimes, which was both a source of pride and sadness for her.”

According to La Mesa Patch, Tovar said his Maas retained moments of lucidity up into her final year, saying goodbyes to family members.   “One hundred and eleven years old,” she reflected on her birthday in July 2011. “That’s enough.”

The Gerentology Research Group concluded that Maas was the 44th oldest person in the world, and the third oldest in California.  An autopsy conducted at UCLA Medical Center found no cause of death, though follow-up tests are planned on tissue samples.

No services are planned. Her remains will be cremated Monday and in accordance with her wishes, her ashes will be scattered at sea along with those of her aunt, Tovar’s mother.  “My mom was her niece, but I think she was more like a daughter to Freddie,” Tovar said of Maas, who never had children.