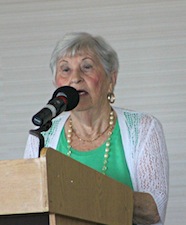 August 26, 2013 (El Cajon) – “The smell of burning bodies was 24 hours a day. Some put their hands on the electric wires and died…killed themselves,” said Rose Schindler, Holocaust survivor of the Auschwitz concentration camp during World War II.

Rose and her husband Max were at Grossmont College to give a talk on their shared experiences during the Holocaust to students of the Summer Institute Program (S.I.P.) on July 22.  Their goal is to make sure that the world never forgets the horror of the Holocaust, in hopes that such a tragedy will never happen again.

Don Harrison, acting director of College and Community Affairs, said the Schindler’s presentation was to the S.I.P. students “who just graduated from high school and are from immigrant families or come from disadvantaged families and are the first to go to college in their family.”

Rose, 83, first started giving presentations on her experiences in Auschwitz when her son, Steven, attended Louis Junior High and found it would benefit her son and other students if she shared her experiences as a Holocaust survivor.

“We have to do this because everyone is getting older,” Rose pointed out.  “I was 14, taken in 1944,” she explained. “I lived on a farm, lots of land.  We had everything we needed.  No stores in town, no dress stores, one shoe store, butlers.”

But later, she recalled, “Things started getting hard.  Non- Jewish kids who were friends and neighbors started getting mean to us.  Throwing rocks.  Forty percent of the town (Seredne, Hungary) was Jewish.  We were told ‘If you don’t behave we will shoot you.’  Many non-Jewish people worked for the Jews.  When were went back there hoping to see old timers, people we knew, we were told ‘When Jewish people were here we never had it so good.’”

Eventually Rose and her family were shipped by cattle cars to the concentration camp.  Rose was imprisoned at Auschwitz; she eventually ended up in a work camp.  Only Rose and her two older sisters survived.

“Dinner was soup---rice, cabbage, or potato-- and dirt,” Rose said. Pans used to cook the soup were not always washed.

“There are no words to describe Auschwitz.  I was there three to four months, she recalled. “I was in a long time because I was not selected to go to the slave labor camps.  You either got the labor camps or the gas chamber.”

“There were no blankets, no pillows, and no mattresses. The smell of burning bodies was 24 hours a day,” continued Rose, “Some put their hands on the electric wires and died…killed themselves.”

“Who looked them in their eyes?” said Rose when asked what the guards’ eyes reflected.

Her husband, Max, was freed from Theresienstadt.  They met after the war in England and married and then moved to the states.  They ended up in San Diego where they started a family and a business.

Max spent time in five different working camps.  Times were “tough, difficult,” he recalled. “You had to focus on yourself.”

He worked digging ditches, doing roadwork, and shoveling coal at the age of 13 to 16. “The salt mines that I worked at in Wielka, Poland, are a tourist site now,” he said.

“There was no sanitation, no latrines…You washed yourself in a horse trough,” he said of life in the work camps. “There were three levels of bunks with one blanket for three people.”  Food included coffee, soup, and just three ounces of bread at night.

“If someone wants to know how we survived, it was because of having my father and brother with me and the sense of camaraderie,” Max said. But tragically, he added, “My father died right after we were freed.”

Another hardship was the loss of education during the years he was a prisoner.  “We lost all kinds of schooling during those years,” he noted.  “All my trades after that were through self-determined, self-made.”  After coming to America, he wound up working 26 years for General Dynamics in San Diego.

Both Rose and Max are troubled by Holocaust deniers.  “When I speak to groups, I want them to spread the word…that this did happen—this tragedy,” Max concluded.

S.I.P. student, Cheyanne Roberts, of Ramona, one of about 50 in the audience, had read the book “Night” by Elie Wiesel in preparation, then reread it two more times.  After the Schindlers’ presentation, Roberts said, “It reminded me of what I already knew, but it was eye-opening.”