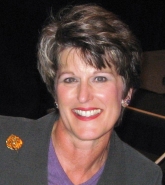 May 5, 2010 (El Cajon) -- The Board of Directors of Home of Guiding Hands announced that long-time Executive Director Carol A. Fitzgibbons has resigned to accept a position with Inland Regional Center. Fitzgibbons will become the Executive Director of the center, which contracts with the state to offer case management services to people with developmental disabilities in Riverside and San Bernardino Counties.

For 16 years Carol led Home of Guiding Hands (HGH), the nonprofit organization which has been providing residential services and a variety of support programs to children and adults with developmental disabilities in San Diego County for more than 40 years. With more than 400 employees, HGH is headquartered in El Cajon and is one of the largest employers in East County.

“While I am happy for Carol, I am sad for HGH,” said Board Chair Rick Doremus. “We owe her so much for her years of dedicated service and visionary leadership.”

Fitzgibbons is credited with steering HGH though the massive effort that saw the organization transition residents from its original institutional Lakeside campus to 28 six-person homes located in neighborhoods throughout the county, giving residents the opportunity to live as independently as possible with the aid of trained caregivers. She helped expand the organization’s respite services, now one of the fastest growing of all HGH programs. She spearheaded the first half of the organization’s matching gifts campaign earlier this year, raising $100,000 for The Road Home Fund.

In addition to her work with Home of Guiding Hands, Fitzgibbons has been actively involved in a variety of professional organizations that advocate for the most vulnerable in the community: She was a founding member of the Developmental Disabilities Provider Network, a collaborative of area social service agencies serving people with disabilities; a founding member of the Homeownership Coalition of San Diego County, which helps people with disabilities own their own homes; and a founding member of the Special Needs Trust Foundation, which helps families provide financial security for children and adults with disabilities. She served as the Provided Representative on the San Diego Regional Center Vendor Advisory Committee, the East County Action Network (ECAN), the San Diego Disability Advocacy Coalition, and SANDAN, the San Diego Association of Nonprofits.

Fitzgibbons is a 2007 recipient of the United Way of San Diego’s Ben Polak Award of Excellence for Outstanding Executive Leadership. “Even with the recent state budget cuts, we’ve reduced expenses and trimmed costs, but Carol has always made sure that the quality of services is never compromised,” said HGH Board Chair Doremus. “The entire board joins me in wishing her only the best in this new chapter in her life.”

The board has created an Executive Search Committee to find Fitzgibbon’s replacement.

Carol for all time has helped very many people and in particular children, its program HGH successfully copes with the appointed plans, it is a good example for the others