February 14, 2012 (El Cajon)—A suspect wanted in a January home invasion robbery remains on the loose tonight. Late this afternoon, police with guns drawn surrounded a black sedan with tinted windows matching the suspect’s vehicle description on I-8 in La Mesa.

Officers shut down two lanes during the terse stand-off. The San Diego Police ABLE helicopter used heat-sensing technology to try and determine whether the suspect was in the vehicle. 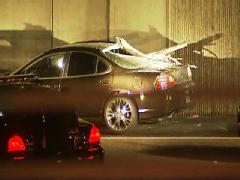 pped what appeared to be a large tree branch onto a rear window from a wall above, smashing the glass. Police then pried open the trunk and searched the car, but found it empty.

So THIS is what made me late to dinner reservation at Flemming's in the Gas Lamp District! The story mentions this guy is a suspect in a home invasion in January, seems to be more and more of these every year. When I moved to PB while I was attending UCSD, San Diego seemed to be a utopia, but it seems these days more of the low-lifes near the border are creeping up into our neighborhoods. I've installed a home alarm system, purchased a Glock and even have a little yapping Terrier to keep guard, which I wish I didn't need to feel safe. Sometimes I feel like moving back to Northern California but I think I'd miss the weather way too much!