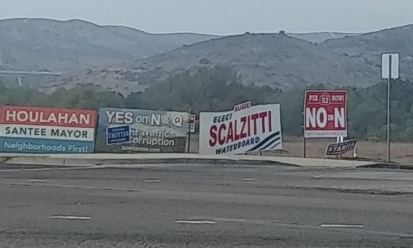 By Mike Allen
October 7, 2020 (Santee) -- Despite a 4-1 approval of the Fanita Ranch housing development last month by the Santee City Council, the builders are trying to ensure nothing holds up the project.
This week, San Marcos-based HomeFed Corp. filed documents stating that the publicly traded business contributed $250,000 to the No On N campaign, bringing the company’s total contribution to defeat the measure to $299,900.
Van Collinsworth, who heads up Preserve Wild Santee, the environmental advocacy group that spearheaded the measure called the General Plan Protection Initiative, said the developers are worried that Fanita Ranch will ultimately be defeated if it ever goes to a public vote.
The initiative seeks to require that any new development that exceeds the current General Plan in density or zoning must be approved by a majority of city voters.
Because Fanita Ranch was already approved by the council at its Sept. 23 meeting, it would seem beyond the reach of Measure N even if voters pass it next month.
Not true, says Collinsworth, who wrote the measure---which includes language that would trigger reviews for all projects that require General Plan amendments dating back to April 6, 2018.
That means the amendment approved last month for Fanita Ranch must go to a public vote and reveals why HomeFed is pouring so much money into defeating N, he said.
“They’ve done everything in their power to make sure people cannot vote on this issue. If they can, they know it will be voted down,” Collinsworth said.
Jeff O’Connor, HomeFed vice president, said Measure N wouldn’t affect Fanita Ranch, but would destroy the future of Santee.
“Measure N represents the greatest threat to the future of Santee,” O’Connor said in an email. “Measure N would send a clear message that Santee is not business friendly. Businesses would not expand, but likely move out, and new businesses would not locate in Santee.”
In addition to campaigning on behalf of Yes on N, Collinsworth is mounting a challenge to the City Council’s Fanita Ranch vote. He said he received approval from the City Attorney to begin collecting the required number of signatures to qualify for either rescinding the vote, or putting the project to a public vote.
“The clock is now running as of today (Oct. 5), so we now have 30 days to collect an estimated 3,500 signatures (10 percent of the city’s registered voters). The deadline is Nov.3, election day,” he said.
Collinsworth says his group is so adamant about pposition to Fanita Ranch because the development would put about 8,000 lives in danger during a wildfire event.
“They’re putting people in harm’s way,” he said. “There would be 8,000 lives at stake in a wind-driven corridor during a wildfire. It’s especially negligent because they eliminated the Magnolia Avenue connection,” he said.
Santee’s Council spent considerable time at its meeting last month talking to its fire chief and other consultants about the mitigation elements to Fanita Ranch, and determined these were sufficient, even with the elimination of a connector at Magnolia Avenue. The experts stated the area’s residents would be able to safely evacuate during an emergency using the two connector roads of Cuyamaca Street, and Fanita Parkway.
O’Connor said the company eliminated the Magnolia Avenue connector in its plan because the estimated $5 million for the construction could be better spent on addressing the ongoing congestion on Highway 52. HomeFed has committed $15 million to making a series of lane additions and other improvements to SR 52 and local roads, but the total cost for all the planned improvements is more than $35 million.
HomeFed has promised that it will not allow any new owners to move in until all the SR 52 improvements are completed.
O’Connor also said the connector for Magnolia Avenue was  dropped to avoid any possible conflict of interest charges involving Councilman Rob McNelis who owns property near the street.
The Fanita Ranch development was passed in a vote in the early morning hours of Sept. 24 after about a six hour meeting. Councilman Stephen Houlahan, who is running for Santee mayor, cast the lone no vote.