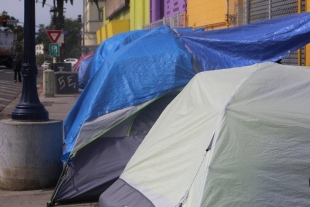 Updated with corrected figures for El Cajon, where homelessness rose and a higher percentage are without shelter than last year.

May 2, 2019 (San Diego’s East County) – For the second year in a row, the annual Point-in-Time homeless count for 2019 found a 6% drop in the number of homeless people living on the streets and in shelters across San Diego County.  The count found a 1% increase in those who are sheltered and a 10% decrease in those left unsheltered.

Led by the Regional Task Force on the Homeless, the count found 8,102 homeless people, of whom 3,626 are sheltered but the majority, 4,476, remain unsheltered.

East County has 13% of the county’s total homeless population. In East County, the county found 1,052 homeless people, of whom 563 are sheltered and 489 are unsheltered.  Some East County communities saw a drop in the number of homeless, while others had an increase.

El Cajon, the only East County community that has homeless shelters, has 787 homeless people, of whom 298 are sheltered but the majority, 489, remain unsheltered. The total number of El Cajon homeless is up significantly from last year’s total of 679--and a higher percentage are without shelter. Last year the city had 391 sheltered and 288 unsheltered.

The biggest drop in East County communities is in Spring Valley/Casa de Oro, where the number of homeless counted this year was 67 – half last year’s 134 total.

La Mesa held relatively steady, with 46 homeless compared to 42 last year, all unsheltered. The city is organizing a task force on homelessness to address the problem.

Homeless is up in Lemon Grove (52 compared to 35 last year) and Santee (46 versus 35 last year). Lakeside had 72 homeless during the count, similar to last year’s count of 74.

Ramona is counted in the North County area, so is not reflected in the East County numbers. But Ramona had a huge spike –97 homeless counted this year, up sharply from just 14 last year – and none of them are sheltered.

Julian is not listed on the count, but Julian residents have told our publication that there are homeless people in their mountain community.

Some homeless advocates have voiced skepticism over the count’s accuracy regarding people living in vehicles in the city – with only 275 people counted living in cars and 37 in RVs.

“This is an absurdly low and highly politicized undercount, coming just at the time when the City has unveiled a new `safe lot’ and is proposing a Draconian new Vehicle Habitation Ordinance,” a statement issued by the San Diego Housing Emergency Alliance (SDHEA) reads.  Two years ago, the count found 817 people living in vehicles, the letter notes, and rents have risen sharply since then.

Ann Menasche, senior attorney for Disability Rights California, says her office has been in touch with nearly 90 people living in vehicles in the city, most of them in RVs.  She agrees that the numbers “simply make no sense.”

Countywide, the count found that 78% of the homeless reported become homeless in San Diego—not moving here from somewhere else.  Over a third (36%) have a physical disability. Veterans account for 10% of the homeless, and 12% of the homeless are youths under age 24. Among our region’s homeless, 3% are families with at least one child.

Over 1,500 people volunteered to participate in this year’s homeless count, which this year included one-on-one interviews with homeless people to help assess their needs.

Deacon Jim Vargas, president and CEO of Father Joe’s Villages and Secretary of the Regional Task Force on the Homeless, says ““I’m encouraged to see our community finding new ways to gather more complete information about the state of homelessness in San Diego. An in-depth annual count is a helpful complement to what we learn every day helping people get back on their feet at Father Joe’s Villages. I was especially pleased to see the use of one-on-one interviews this year, as well as new efforts to count people across more neighborhoods of San Diego. This is a step in the right direction toward gathering helpful data.

He adds, “This count is also a reminder for all of us that too many people are still struggling. As we look beyond the numbers, we know that each person experiencing homelessness has a unique story and needs a unique combination of housing and services in order to achieve stability. A comprehensive plan that spans the region will be necessary to effectively and efficiently deploy adequate resources.”

The 2019 count found 46 people in La Mesa experiencing homelessness (all unsheltered) compared to the 2018 count of 41 (29 sheltered; 12 unsheltered). Data can be found on the Regional Task Force on the Homeless website here: https://www.rtfhsd.org/get-involved/weallcount/ Full report is expected to be released in August.

We corrected the typo above, it is 46 this year.

I wonder how much the exorbitant price of rental housing is a direct cause of people becoming homeless? Factor in low wage earners, in particular those who are retired or disabled living on low, fixed incomes and simply cannot afford the ridiculous high costs of living in San Diego county. California has become a less than desired place to live for many of us because of this. I know a few people who plan on moving to another state after retiring. It'd be nice if something could be done to fix the inequities we face.