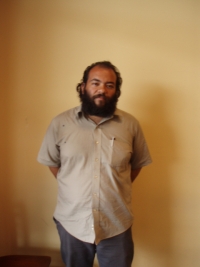 This is the latest in a series on homeless persons in East County based on first-person accounts.  Because voices of the homeless are seldom heard in the media, this provides an ongoing platform for the homeless to relay their unfiltered stories. If you are homeless, or know of a homeless individual willing to be interviewed, please contact editor@eastcountymagazine.org.

April 3, 2010 (El Cajon) -- On campus at El Cajon’s Grossmont College, one is likely to find Andres Hernandez in the library quietly reading pre-Socratic philosophical treatises before class. Outside a local bookstore, he may also be seen thumbing through the eighth century B.C. poet Hesiod’s Theogeny, boning up on Greek mythology. In an interview with East County Magazine, Hernandez says that he gravitates toward these two places because they serve as intellectual hubs for the homeless student.

Hernandez was born in Chula Vista in 1987 to a Mexican mother and Puerto Rican father. During his first 10 years he was raised in Tijuana. According to Hernandez, his father grew restless for his island home and eventually pulled up stakes, moving the family to Puerto Rico. Owing to his father’s considerable salary in an aeronautics company, Hernandez was privileged to receive a private school education in both places—which included bilingual instruction.

But at home, Hernandez bore witness to his parents’ volatile relationship. “My parents were always fighting,” he recalls. “I kind of lost myself in books to escape my reality.”

One year after graduating high school, he claims that he finished two semesters of college, accrued 27 credit hours and earned a 3.20 GPA. The same year his parents divorced. Breaking ties with his birthplace for a second time, his father then relocated back to Tijuana. Hernandez soon followed.

Hernandez states that one day, out of the blue, his father abruptly announced that he was leaving. “We were renting an apartment, and he took his stuff and left,” he said. As a newly enrolled college student living in Mexico while commuting across the border to attend classes in Chula Vista, Hernandez was dependent on his father to pay the bills while he focused on his studies. For a brief time he remained alone in the apartment, “surviving on the compassion of the landlord.”

Abruptly, he felt the clutch of economics beginning to drag him into an undertow. Living situations rapidly deteriorated from there.

In February 2007, he withdrew from a full course load at Chula Vista’s Southwestern College and moved to a trailer park in Lemon Grove. There he found employment as a clerk in a 99-cents store. While he struggled to make ends meet, dissatisfaction about the wrong turn his life had taken began to intensify. At work, Hernandez says, he was frequently overwhelmed by anxiety attacks.

Depression and loneliness made him miserable. “I felt like I had no one to talk to,” he explains. “I felt alone in the world. Even if I was in a room full of people I felt like there was no one there.”

A passion for learning had never waned, however. He decided to re-dedicate himself exclusively to college. As a consequence, he quit his job and signed up for 19 units at Grossmont College in August 2008. One major problem: He miscalculated his outgoing expenses against the incoming payouts he received from a previously awarded Pell Grant. Financial aid alone simply would not cover all his expenditures. “I took a gamble and failed,” he admits dryly.

Hernandez tried working while going to school, but concluded that concurrent study and employment are incompatible. “If I’m working I can’t concentrate on studying,” he said, noting that he was also dissatisfied with his job and left voluntarily. “It shouldn’t be that way,” he observed. “You shouldn’t hate what you do. So since studying was the one thing I loved, I thought, that’s what I’m supposed to do.”

Unemployed in the spring of 2009, he dropped out of college after he was evicted from his Lemon Grove trailer home. No longer able to support himself, he was perplexed about his next step. With hardly more than bus fare to his name, he set out for Los Angeles to live with a friend with whom he had struck up a two-month online acquaintanceship. “Very, very, very unwise move,” Hernandez concedes. “I didn’t know what to do…What does the book of life say one should do in this situation?”

He resided in Los Angeles for a few short months. His original intention was to enroll in college upon arrival. That never became a reality. He regrets that he led a mostly unproductive lifestyle while there. According to Hernandez, the new roommate began to regard him as a moocher and promptly kicked him out.

Subsequently, in the summer of 2009 he phoned a brother in Hawaii who he barely knew. Hernandez boarded a flight to Hawaii after his brother purchased a two-way ticket. While in Hawaii, Hernandez read Homer’s epic poems, the eighth century B.C. works the Iliad and the Odyssey. They shared living quarters for about one month before his brother turned him out of doors, he said without elaborating on the reasons. He spent two days on the streets before entering a homeless shelter, biding his time until the return date of this roundtrip flight.

After a short and unhappy stint crashing with an old neighbor in Tijuana, he “decided it was better to be alone than with bad company.” Hernandez began to live on the streets in October or November of last year. It was the first time in his life that he had spent a considerable period without a roof over his head.

Today, the 23 year old acknowledges his past mistakes. “I have made very bad decisions.” In spite of the bleakness of his circumstances, he takes two philosophy courses at Grossmont College. He receives a type of financial aid termed the Board of Governors Fee Waiver. For eligible California residents, it sets aside enrollment fees at the community college level. A bachelor’s degree in philology, philosophy or linguistics is his ultimate goal.

Despite spending the majority of this life abroad, Hernandez is staunchly patriotic and adamantly self-identifies as American.

In terms of East County resources, he says he has visited El Cajon’s Crisis House once this year to obtain food. He usually sleeps in a city park and subsists on food stamps. Periodically he accepts loans from his father and gifts from his mother. He says his father checks in on him now and again. Hernandez is dead set against acts of charity that are inspired by pity. During the interview with East County Magazine at a coffee shop, he refused offers of food and drink.

He fears being victimized in the park. In a recurrent daydream, he casts himself in a violent scene from the movie “American Psycho.” In it, a homicidal yuppie assaults a homeless man in an urban back alley.

Yet Hernandez insists that the anguish he felt when he first became homeless has gradually leveled off as he has become conditioned to his environment. “I am not depressed anymore,” he says.

Hernandez contacted East County Magazine initially via e-mail. Perhaps partly due to his esoteric interests and an aversion to chitchat, he seldom finds it easy to relate to others. Though not anti-social per se, in person he appears jittery and ill at ease. Long pauses are broken by soft-spoken words laced with a faint Spanish accent.

Regardless of his past instability, he has never sought out psychological therapy because he feels that his inner turmoil is a natural fact of life. “Drugs are not the answer. You have to learn to live with it,” he reflects on life, “to figure out the balance between the Apollonian and Dionysian.” (These are bifurcating concepts of Western philosophy which represent clashes within oneself and society at large.)

“Nietzsche feels alone all the time,” he rationalizes, referring to the 19th century German philosopher. “I can relate to Nietzsche.”