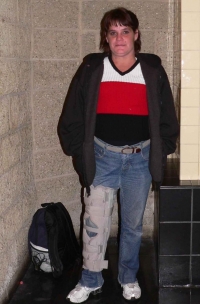 This is the first in a series of interviews profiling people who are homeless in East County. If you know of a homeless person willing to be interviewed, please contact editor@eastcountymagazine.org

January 28, 2010 (El Cajon) – “I’m trying to get off the street,” says Dawn Marie (last name withheld), who has been homeless for three months and is currently sleeping in an abandoned building in El Cajon. “I’ve been to college, but I can’t get a job because I have no experience, and you can’t get experience if nobody will hire you.”

Complicating matters, Dawn Marie suffers from a genetic medical condition known as neurofibromatosis. “I get fibrous tumors wherever I have a nerve,” she said, rolling up a sleeve to reveal bumps on her arms. She also wears a brace on her knee, which  had previous surgery for a sciatic nerve tumor. She  needs more surgery, but has no insurance.  Waits for medical care through County Medical Services are long and coverage is limited.

Dawn Marie says she became homeless after her boyfriend broke up with her for another woman. She had a temporary job working in a Halloween store last fall, but has not had work since.

“The first night, I was scared and I was cold,” she recalls when asked about her first night on the streets. A friend came and camped out with her that first time. She relied on advice from other homeless people, soon forming “my street family” with others in a similar situation who help look out for one another.

Before finding an unlocked abandoned building several nights ago, she sometimes slept outdoors, occasionally sleeping on friends’ sofas. In rainy weather, she has slept in a tunnel.

“I’ve lost all my stuff twice,” she says. “But material possessions, clothes, I can replace, as long as I am safe.”

She has led a hard life. As a child, she moved to San Diego from Florida with her mother following a family dispute. “Back then, they had shelters for families here. They don’t have those anymore,” she notes.

She attended elementary school in East County and graduated from Sweetwater High School in National City. She worked at Taco Bell as a senior. The night of her senior prom, she reveals, “I ended up getting raped.”

Not long after, she met a military man at a shopping mall and married him. “I was five months pregnant when he was on West Pac, so I had to grow up very fast.”

Eight months after the wedding, however, she was a divorced single mother, due to what she described as “obsessive/compulsive and stalking” behavior.

She began using crystal meth to lose weight after her daughter’s birth, a mistake she deeply regrets. “I’ve been clean since 2005,” she says, adding that she has never been arrested and never gone to jail, though she was once cited for “unlawful lodging” while homeless.

She raised her daughter until age nine, when the girl chose to go and live with her father. “He’s remarried with five other kids,” she reflects. “She was happy there, so I couldn’t say no.”

She worked two jobs putting herself through community college at Grossmont, studying medical billing and other medical-related fields. She recently graduated, but has not found work yet in a down economy.

Dawn Marie was homeless once before, while living in Seattle. But back then, the situation was far different—and more of an adventure. “I hitchhiked across the Cascades,” she recalls. “Up in Washington, there were places to do your laundry and take a shower. We don’t have those in East County.”

East County has no homeless shelter. Asked why she doesn’t go to the closest homeless shelter in downtown San Diego, Dawn Marie cites several reasons. “To go there you need a trolley pass. That’s $5 for a day pass, each day. If you’re busted without a pass, it’s around a $170 ticket.” There are also waiting lists to get into shelters, she says, adding, “The horror stories I’ve heard scare me—lice, bedbugs. At least where I’m staying, it’s clean and dry.” The abandoned office has a bathroom, and she has food stamps, but no money for anything else.

During our interview, I bought her a chicken dinner at a local restaurant. It was obvious she was ravenous, though she was hesitant to accept any charity. “I haven’t eaten in two days,” she confided, adding that she hasn’t been in a restaurant in a long while. At times, she has resorted to panhandling when she needed money for food.

Despite the hardships she has endured, she maintains goals for the future. “I want to get a stable roof over my head, work part-time and go to school part-time. I’ve done in-home care, which I really liked. I’ve done customer service; I know how to do deli platters.”

One social services agency suggested she do in-home care in exchange for discounted lodging. “But they still wanted $200 a month, and I don’t have it,” says Dawn Marie, who worries she will soon run out of makeup and have difficulty being presentable for job interviews.

Asked what kind of work she would accept, she replied, “Anything legal. I’ve cleaned apartments. I’m not proud. I will scrub a toilet to earn money, but I’m not going to prostitute myself.”

Classical wedding dresses, bridal gowns, wedding rose are all requirement in Wedding Celebrations. Choosing a best color for bridesmaid dresses, Designer Bridal gowns,Evening Dresses, Prom Dresses, Cocktail Dresses. These are some ideas for wedding gowns for fall and winter weddings.For bridal gowns a extended cheap wedding dress will be gorgeous with a black elegant bride dress dream one should style.

Very informative and trustworthy blog. Please keep updating with great posts like this one. thanks really thanks. registry optimizer|

Asked what kind of work she would accept, she replied, “Anything legal. I’ve cleaned apartments. I’m not proud. Convert PDF to EPUB I will scrub a toilet to earn money, but I’m not going to prostitute myself.”

One social services agency suggested she do in-home care in exchange for discounted lodging. “But they still wanted $200 a month, and I don’t have it,” says Dawn Marie, who worries she will soon run out of makeup and have difficulty being presentable for job interviews.blu-ray ripper
blu ray to mkv
ipad converter

My more than 20 years of working with the homeless has taught me that there is a reason someone is long term homeless and it has nothing to do with losing a job or home. You have to make an effort to provide for yourself. You have to be willing to take what ever steps are required to provide a home for yourself. Not just moan about the unfairness of life and hold your hand out.

No one is responsible for you but you.Make the effort and take the steps.