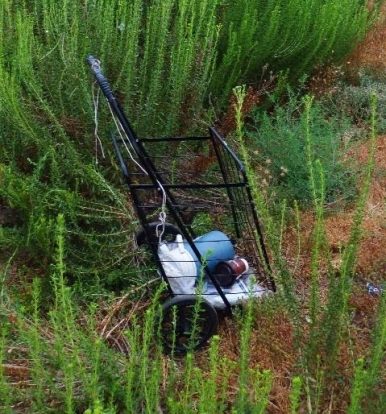 File photo: cart at a homeless camp in Spring Valley

Updated with information on additional actions La Mesa has taken in the past week and will consider this week to help its homeless residents.

September 17, 2020 (La Mesa) – The state and county want to convert a Holiday Inn in La Mesa to provide 139 units of transitional housing for the homeless and those at risk of becoming homeless due to COVID-19.  Supervisors initially approved an application to the state for the “Homekey” project on Sept. 15 with no prior notification to the city of La Mesa, residents or businesses nearby.

La Mesa City Councilmember Kristine Alessio told ECM that according to the project's developer, the Affirmed Housing project would provide short-term housing for homeless from the county’s unincorporated areas such as Lakeside and Santee, that have large homeless encampments, but she said it’s unclear whether any of the units would be available for La Mesa’s own homeless population.

During COVID-19, more people are at risk of becoming homeless when eviction moratoriums expire and past-due rents come due or mortgages go into foreclosure. 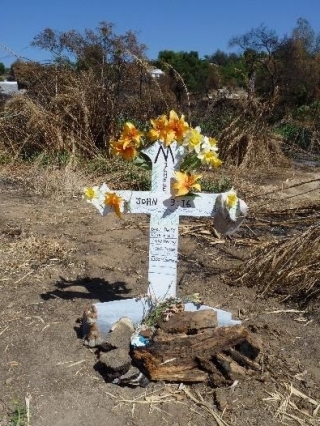 Homeless persons are at risk of other perils; a homeless woman in Lakeside died when a fire swept through her riverbed encampment in 2013 (photo, right).  Others fall victim to crimes, are struck by vehicles, or suffer illnesses exacerbated by unsanitary conditions and extreme weather.

But while La Mesa leaders all say they support helping homeless in their city and have recently taken actions to do more, some voice concerns over La Mesa becoming a dumping ground for large numbers of homeless individuals from the county’s unincorporated areas without any public notification or discussion.

“There was no notice, no community input, and no restrictions, such as requiring clean and sober living,” Councilmember Kristine Alessio told ECM in a phone interview tonight, adding that it’s unclear whether there would be services such as mental health counseling, those case managers would be assigned. “No one wants to shirk their share of homeless services, but the fact that this is not for La Mesa’s homeless is troubling.”

Under the contract, the facility would remain in use for homeless transitional housing for at least 55 years.

This would be the only such county facility serving the entire unincorporated area, which has 13.4% of the entire homeless population countywide. La Mesa, by contrast, has only about 52 homeless people, as of the January Point in Time Count.

Some of La Mesa’s homeless have been sleeping in front of downtown merchants and even in front of City Hall, since like the unincorporated areas, La Mesa currently has no homeless shelter. 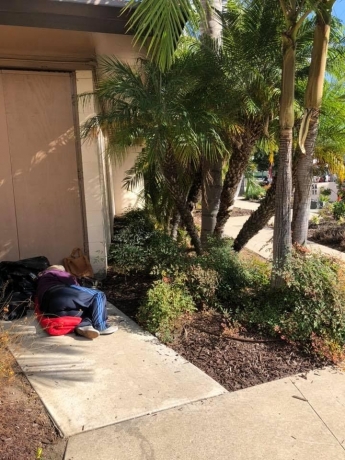 The city has no legal right to stop the project. But the City Council is convening a meeting Monday at which it will hear public testimony and perhaps take an advisory vote to submit to County Supervisors, who have agreed to rehear the project a day later at the urging of La Mesa City Manager Greg Humora.

On Monday, Sept. 21 at 6:30 p.m., the La Mesa City Council will hold a special meeting to consider the joint application by the County of San Diego and Affirmed Housing Incorporated to convert the Holiday Inn Hotel at 8000 Parkway Drive into transitional housing for the homeless and those at risk of homelessness due to COVID-19.  It would be funded by federal CARES Act grants and funding from the state and county in partnership with the developer, Affirmed Housing Group.

Email comments must be submitted to the City Clerk at comments@cityoflamesa.us by 4:30 p.m. the day of the Council meeting and be no more than 300 words. Members of the public who wish to make comments on agenda items may also  do so via Zoom at the La Mesa Community Center, 4975 Memorial Drive. Social distancing will be strictly enforced by City personnel and attendees are encouraged to wear facial coverings while waiting to speak.

Alessio says she spoke to the developer to ask whether the facility would have rules such as the East County Transitional Living Center in the city of El Cajon, which requires residents to be clean and sober and also provides services such as job training and more, “They said no.”  She added that the developer told her the homeless would be coming largely from Spring Valley and Lakeside—areas that include many homeless people camping in riverbeds. Their situations range from people merely down on their luck to some with problems ranging from drug addiction to mental illness and physical disabilities.

The city of La Mesa has recently initiated several actions to help the homeless including partnering with the East County Regional Task Force on outreach , forming the Citizens Task Force on the Homeless which recently provided recommendations that staff is developing into a La Mesa Homeless Action Plan, dedicated $1.3 million in grant funds for outreach, mental health services and housing for La Mesa’s homeless as part of a new Homeless Outreach and Mobile Engagement (HOME) project. The city has also approved affordable housing at several sites and is working on a partnership for affordable housing on the former police station site downtown.

Alessio suggests the project the county proposes at the Holiday Inn site, however, won’t even help many that it purports to want to aid—those at risk of homelessness due to COVID-19, since screening of residents could take up to six months.

In addition, if the project goes forward, the city would lose a half million dollars a year or so in hotel room taxes that have been used to fund projects ranging from parks to road repairs.

“I look at this as just someone wanting to make a buck,” Alessio says of the proposal for the Holiday Inn site. “If you want to help us, give us the two million dollars a year,” she suggests for the county, so that La Mesa could build its own projects to help the homeless. County shelters for unsheltered persons in Lakeside and Spring Valley should be put in those unincorporated areas where they already live, she suggests.

Councilman Colin Parent is drawing criticism from some community members for accepting contributions from the project developer, Affirmed Housing, on behalf of the nonprofit Circulate San Diego, for which Parent is executive director and general counsel. Parent's name is listed on the group's website as the contact person for corporate donors on a page that also lists multiple developer donors inculding Affirmed Housing.

Aaron Amerling posted on Facebook, "The developer on this project is a corporate sponsor of Colin's lobbying group, in effect they pay his salary. Makes you wonder the real reason Colin is pushing this. He must RECUSE himself from this vote." Parent has thus far not recused over perceived conflicts due to donations to the nonprofit he represents from companies with projects before the La Mesa City Council.

The Holiday Inn site is near two senior living centers, as well as apartments and single-family homes, restaurants, retail and other businesses. The hotel industry has been hard hit by COVID-19 closure and a sharp drop in business and recreational travel.  Holiday Inn has not yet finalized a sale, however, according to Alessio.

Supervisor Dianne Jacob, who represents East County, voted no on project Sept. 15, along with Supervisor Kristine Gaspar, but the other three supervisors voted yes, approving it on a slim one-vote margin.

“Under state law, they can do what they want,” Alessio said, calling the lack of transparency “appalling.” She indicated that after the city manager argued to Supervisors that they needed to hear local input, Supervisors agreed to the rehearing on Tuesday – so the city convened its special meeting this Monday. “Hopefully the Supervisors will listen to us.”

These actions come after La Mesa's Council voted last week to take significant steps to help the city's own homeless, as the Union-Tribune reported. That plan will be modeled after the CAHOOTS plan (Crisis Assistance Helping Out On The Streets). CAHOOTS is a mobile crisis intervention team serving Eugene and Springfield, Ore., that was designed as an alternative to police response for non-violent crises, including mental illness, homelessness and addiction.

Separately from the special meeting on Monday over the county-proposed shelter, La Mesa City Council's regular meeting on Tuesday, Sept. 22 at 6 p.m. will include  a resolution to ,move forward on helping the homeless in partnership with PATH using community redevelopment block grants and coronavirus relief funding, as well as proposed multi-family housing on the former police station site, among other agenda items.  View agenda and details.