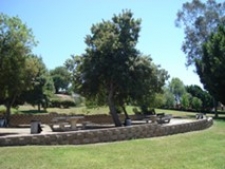 February 12, 2021 (La Mesa) – La Mesa Police report that a homeless man, 47, was found dead at Aztec Park Wednesday. The park is located at the corner of Morocco and Aztec Drive.

On social media, several residents had earlier voiced concerns about the individual, whom they mistook for a woman.

Laura Anne Maturo wrote that “the police were called numerous times and didn’t respond.”  She indicated that she spoke with the homeless person Tuesday night around 9 p.m..

LMPD issued a statement responding to concerns raised on social media. “The La Mesa Police Department did receive one calll regarding the man screaming in the park at about 1:30 p.m. on February 9th. Officers responded within 15 minutes. The man told officers that he had been having a nightmare and declined needing medical attention.”

The next morning, police received a call reporting that the man had been found deceased in the park. Officers found no obvious signs of trauma. The San Diego County Medical Examiner’s office has notified the man’s famliy and will determine the cause of death.

“Our investigation has shown that he was not from the La Mesa area and only recently arrived in the city,” the LMPD press release states.

The police statement offers advice for community members on how to get help for homeless people in need.

“It is a tragedy that anyone would pass away under such circunstances, and our thoughts are with the man’s famliy at this time. It is our hope to prevent any such incidents from happening in the future. The City of La Mesa H.O.M.E. (Homeless Outreach and Mobile Engagement) Team can be reached at (619) 667-1475 or home@cityoflamesa.us. They will respond and attempt to contact the individual and provide them with resources and housing. Of course, anyone witnessing a crime or anything requiring immediate assistane should stll contact the Police Department at (619)667-1400 or by calling 9-1-1.”