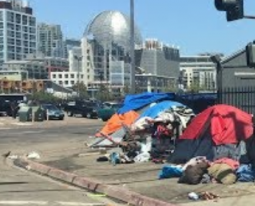 Homelessness in the city spiked 10% over the past year, according to the January 2017 Point in Time homeless count. Most of those—5,612—were unsheltered. There are not enough beds and local shelters have long waits. San Diego is also the fourth least affordable city in the nation for housing, making the situation even more bleak for homeless people here.

Despite have a  shortage of shelters for homeless people to stay in, San Diego Police have repeatedly cited and arrested homeless people for violating the city’s encroachment code.   The code was originally meant to prevent placement of trash bins and planters in the public right of way—not to be used against homeless people living in parks or near public walkways.

Having arrest records, often multiple times over, merely for sleeping in public places ironically makes it even harder for homeless people to get jobs and get off the streets.  Many homeless can’t afford to pay fines, and wind up in jail over and over again as a result.

The suit alleges that homeless people are being discriminated against, violating equal protection guarantees in the U.S. Constitution.

But some have voiced concern about the suits and want to see homeless encampments cleared out of downtown, city underlying addiction and mental illness issues that have caused concerns for neighbors and business owners.

Plaintiffs’ attorney Scott Dreher has previously sued the City twice before on behalf of the homeless, settling both cases.  That litigation led to an end on police destroying personal property of homeless people during sweeps and halting enforcement of an illegal lodging statue from 9 p.m. to 5:30 a.m. leading to a storage center for the homeless funded by the City.