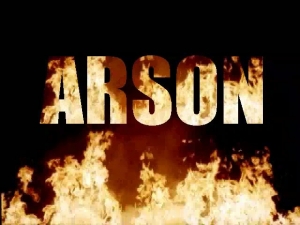 East County News Service
March 26, 2020 (Spring Valley) – A 76-year-old transient woman who previously started two fires ruled accidental has been arrested and charged with arson after starting a fire which scorched the exterior of a strip mall building in Spring Valley.
Last night shortly before 8 p.m., deputies from the Rancho San Diego Patrol Station responded to assist the San Miguel Fire Department in the 500 Block of Grand Avenue, Spring Valley.
Upon arrival, it was determined that Leona Head, a local transient, had set fire to an electrical box, says Sergeant Curt Cartie with the Sheriff’s Department. “She admitted to starting the fire by attempting to extinguish a lit cigar with a bottle of liquid from a bottle labeled `Clorox,’” he adds.
The liquid substance was unknown but appeared to be a flammable substance. The fire engulfed the electrical box, which was adjacent to a strip mall type building that contained several small businesses.
The fire spread to the roof before San Miguel and Bonita Sunnyside Firefighters arrived on scene. The flames were quickly extinguished. The fire appeared to damage only the exterior of the building and the electrical box.
No injuries were reported as a result of the fire. Head was involved with two other previous fires but were ruled accidental.
The Sheriff's Bomb Arson Unit was notified and waived their response. Leona Head was booked into Las Colinas Detention & Re-entry Facility for arson.