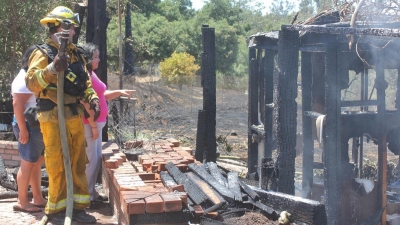 “We are too late. We the community of East County have let our homeless vets down again.”  --a reader's post on Fox News story about the fire

May 12, 2013 (Lakeside) – It was a grim Mother’s Day for families displaced by a fire that ravaged mobile homes in Lakeside today, and for a homeless woman veteran who is hospitalized with serious burns.

A resident named Veronica, who declined to provide her last name, told ECM she was worried about her three small dogs still in t 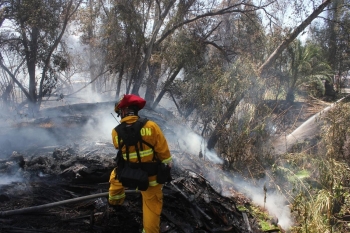 he trailer park. She was also worried about a friend. “She lost her trailer you see; she has four children…They have nowhere to go.”  But she added, “The neighbors will help her.”

The burn victim, a woman who acquaintances said was a homeless  veteran named Michele, was less fortunate.  She was found lying alongside a road near charred vegetation and  was transported to UCSD Medical Center with life-threatening injuries.

Now some East County residents are asking why communities aren’t doing more to help the homeless.

The fire tore through a homeless camp along the San Diego River before wind-blown embers ignited mobile homes, destroying at least one home and damaging others.  Vehicles and outbuildings were also burned; cause of the fire remains under investigation.

Earlier this month, a homeless man  was found dead alongside a freeway offramp where he camped in El Cajon.  A tipster told ECM the man had been beaten and robbed just days before his death, and had been having trouble breathing since the attack.  Other homeless people have died of exposure or accidents, including a man struck and ki

lled by a trolley in East County and a runaway teen crushed to death when a heavy load toppled onto him in a Lakeside storage yard where he slept.

Rising homelessness has led some local jurisdictions to crack down on homeless sleeping on sidewalks or in parks, forcing destitute people into camping out along riverbeds in brushy, rural—and fireprone—areas farther east.

Walter Choate and Darb Bolby with the Church of Abundant Life have been trying to help the homeless in this area.  “We are trying to set a homeless shelter, for women and men and their families,” Choate told ECM, voicing concern over the fate of people at the burned-out homeless camp who have lost everything –all of what little they owned. 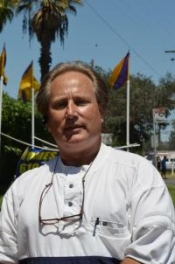 They are trying to start a business, www.TireUpCycles.com, to give homeless people a future while also recycling tires that too often wind up in landfills. The business would recycle old tires into children’s swings, car mats, fire-resistant roofing tiles and more. But so far, local East County cities have not been responsive to their requests, even though Choate operated a similar business in Texas for a decade, and even though Chula Vista has shown interest in helping.

Both Bolby and Choate have experienced homelessness themselves and they see this as God’s work.  They know that not every homeless person will accept help—but want to offer it to those who will.

“We have a problem when we can help a beer-making business in East County to succeed in getting the taxpayers money,” a person named Walter posted on a Fox 5 story about today’s fire, referring to the now bankrupt El Cajon Brewing Company that was loaned $600,000 from El Cajon, "and we can’t help a business, TireUp Cycles.com, with community support and funds needed to help with real problems that we are facing—waste tire piles in our community and our vets that have found thei r selves homeless.” 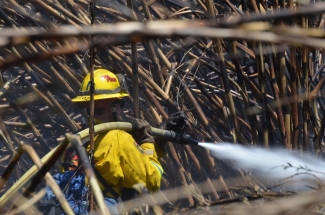 Chief Andy Parr with Lakeside Fire told ECM that the fire was “fuel driven”, exacerbated by a non-native plant, Arrundo, that resembles bamboo and grows along the riverbeds here.  “It has a lot of oil and burns very hot,” he said, adding that this was an example of what happens when there is not defensible space cleared around structures.   Downed transmission lines still electrified and potentially noxious gases form a construction site further hampered firefighting efforts.

Yael Alpert, an ECM reader, offered this help for those who lost homes.

"It is so hard to hear about these people's living quarters," she wrote. "If anyone nee 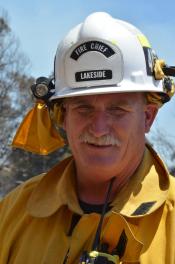 ds help towing a motor home once their possessions are salvaged, we are able to scrap them out. Have them call 619-818-9789. I hope no one needs our services but we will remove anything free of charge. Ask for Elli."

James Stotler, Captain of U. S. Department of the Elite System, a noprofit organization that helps with highway traffic and safety, told ECM that he and his partner, Officer Kyle, were first on the scene. View his video.

“We were on routine patrol heading in for the day and as we came around the corner we noticed smoke, and then we noticed a big wall of fire," Captain Stotler said. "We lit up our vehicle, all the lights…I had to move my truck because a wall of flames….We couldn’t see anyone. We didn’t hear anyone. All we could hear was the roar of the fire, the heat…I dialed 911, contacted the police and fire. When Sheriff’s pulled up I blocked off the road further up and started directing traffic the other way.”

The burn victim was found around a curve in the road a few minutes after they arrived, Stotler says. “I saw them pull her out on a guerney, she was covered up.”

Swift action by firefighters from  multiple jurisdictions including Barona, Lakeside, Viejas, Cal-Fire and Heartland worked together under a unified command system to bring the blaze under control within an hour, with help from an air tanker and helicopter drops.

But help came too late for the homeless woman, who reportedly served our country and is now fighting for her own life in the burn unit at UCSD.

The poster at the Fox news story asked readers to keep the homeless veteran woman in their prayers.  “She has no home, no loved ones to support her,” he concluded poignantly. “This is Mother’s Day. She’s alone, lost and feels forgotten. Let’s reach out to her and let her know her country/community hasn’t forgotten her.”

Michele, the vet fire victim's boyfriend is lost and homeless too.  He can't find his Michele and if he loses her we don't know if we will lose him?  Come on community, let's get involved with this.  TireUpCycles.com has the solution, we don't have to do anything but make a few phone calls, maybe post a comment, or for the more aggressive, ask how you can help.

Here's a comment from Joe's sister: I saw your comment about lakeside fire victim.  My brotherJoe is the boyfriend of Michele for 13yrs,they lived in a tent in the brush that burned for the past 5yrs.

I am saddened and sickened about this. It may be to late for Michele,but not for Joe.   He is not a vet but he is homeless and now he may lose his beloved Michele.   I know he is staying for a month in the mobile home park behind the El Cajon gas station,#41 can you possibly help him find shelter and work?

Please respond to this plea, I am so concerned for his well being.  I have minimal contact w him, Im afraid for him when the reality of this situation sinks in.

Already, 3 lives are involved 2 possibly death situations, and the other having to grieve for a possible lost one.  We can't help every one, but we can these souls here.  comment on your advise and feed back, and we will get back to you.

Fox news, channel 10 news, and 8 news want to hear from you.