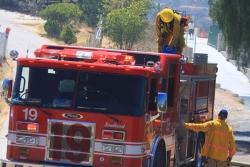 August 23, 2010 (San Diego) -- San Diego Fire Department responded to a canyon fire at 66th and Skyline. The blaze started at mid-day and threatened several homes as the fire expanded in size. Firefighters, with the aid of air attack helicopters, were able to hold the fire to one acre as it burned heavy bush in the center of a populated neighborhood. 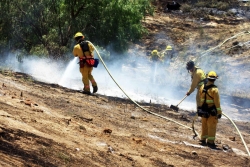 The San Diego Police Department set up road blocks and evacuated the surrounding homes, while the Fire Department made quick work out of a fire that could have done much more damage.