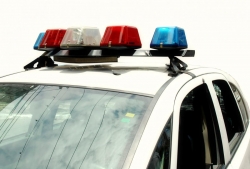 Update:  May 4, 2012 -- The Sheriff’s Department announced on Wednesday night that a suspect had been arrested in the death of a 94-year-old Ramona woman.

May 1, 2012 (Ramona)—The body of a 94-year-old woman was found inside her mobile home at 1212 H Street in Ramona this morning after paramedics responded to a medical assist call.  Due to obvious signs of trauma, Sheriff’s deputies and Homicide Detail were called in, Lt. Larry Nesbitt said.

According to ECM news partner 10 News, the victim was Jean Eskridge, former owner of Jean’s Dance Studio in Spring Valley.

Her son, Jay, told 10 News he rushed over after his mother’s life alert system notified him.  A male caretaker has been questioned by authorities, neighbors said.

Investigators from the Ramona Sheriff’s Station, U.S. Border Patrol (assigned to Sheriff's Homicide), Homicide Detail, and Crime Lab are participating in this investigation.

Cause and manner of death will be determined by the Medical Examiner’s Office.