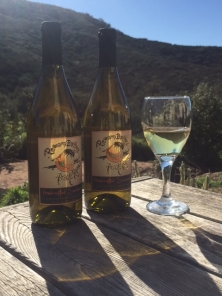 But there’s a catch.  To fill such a big order, they need a larger production facility.  In San Diego County, applying for a major use permit could cost tens of thousands of dollars and take months or years with no guarantee it would be granted.  So they’ll be moving to Imperial County in February, where they say the City of Imperial has granted them an unlimited operations permit for just $350.

I visited Pearson and Pearson to get the buzz on the their honey wine business.

Dale has worked as a military contractor, a diver, and an underwater cameraman for TV shoots including National Geographic and Jacques Cousteau.  “I used to wrestle giant squids,” he said. But after having two shoulders rebuilt and other injuries, he decided it was time to seek safer work. 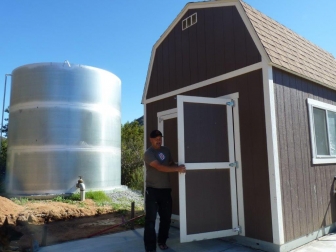 His brother, Mike, is a flight nurse aboard the new medical helicopter stationed at Viejas.  Both jobs come with their share of traumas, including PTSD.  So the two decided to pursue their dream: to make a living full-time, making honey wine.

Honey wine is similar to another fermented honey beverage, mead.  But mead traditionally has malt and may be carbonated.

“Our product is more similar to Tej, an Ethiopian ancient honey wine from Africa,” Dale explains.

Honey wine and its cousin, mead, were once referred to as "nectar of the gods."  Potent honey drinks have been savored by the likes of King Tut and even Queen Elizabeth I. They became a part of Celtic and Viking rituals, where it also became known as honey elixir. Some believed it had special abilities to boost chances of conceiving a male child, which is why it was a European tradition to give newlyweds a month’s worth--or a moon’s worth--of honey wine, hence the term we use today: honeymoon.

Why make honey wine?  Dale says, “The first honest reason is:  we’re not farmers. With our backgrounds, we had to do something different. My brother was interested in the concept of making wine.”  Wine is defined in the U.S. as anything you can naturally ferment to 10-14 percent alcohol. For instance there’s barley wine, peach wine, and even kiwi wine. In Europe, wine must include grapes.  But Dale notes, “In America, you can ferment anything you want and call it wine...honey is our grape.”

Making honey wine also has lower start-up costs. You don’t have to plant vineyards and wait years for vines to mature.

They’ve run a lean operation, starting out production in a small shed with just a few hundred gallons of capacity.  “We’re a couple of broke dudes just trying to make a winery,” Dale quips.

The winery has been selling wine since December 2014, but the company’s roots go back farther. “It took three years to get something good enough to sell,”  Dale says of their long experimentation to find the perfect blend. Those efforts including sourcing honey from Imperial County and consulting a wine sommelier on matters such as the balance and complexity of the wine.

The result is a blend of honey, cane sugar, orange zest and vanilla.

“When we realized how much it would cost to stay in San Diego County, we went to the City of Imperial and rented a 5,000 square foot warehouse.  We will have two 2,500 fermenters there.

By contrast in San Diego County, he notes, “There are a lot of orders that don’t apply to us, but we are forced to comply.”  To stay would have meant having five different departments renew the expansion plans for everything from environmental concerns to traffic impacts, potentially requiring the Pearsons to foot the bill for studies and mitigation of impacts.

“Why do that when I can go to Imperial, have a meeting with the city manager, and they tell me yes?” he asks. “Their attitude was, `Please come work in my city.’” Pearson and Pearson will be the first winery in Imperial Valley.”

At first they tried finding a distributor. But Dale recalls, “Every distributor turned me down because we don’t have grapes in our wine.  One of the biggest distributors said he’d never be able to sell it.”

So he started selling the honey wine himself through an online distribution network.  Then a wine broker called who is now their salesman. “He said I’m going to sell so much of this wine you’re going to need to sign up a distributor.”

The distributor, Arion Wine & Spirits, sells in both California and Asia and revealed a huge potential opportunity.

Dale recalls, “He said, `If you drop ginseng root in the bottle, I could sell a lot of it in Asia...so my brother figured out how to sterilize it and bottle the wine with ginseng in it.” Although adding ginseng powder to alcoholic beverages is not legal in the U.S., the Pearsons' method of steeping in flavor with a sterilized root got federal approval, Dale said.

“We gave it to the president of Arion,” said Dale. Now a massive order of ginseng-infused wine is awaiting a payment guarantee from the bank of China, he added.

In some ways, moving to Imperial Valley, the “honey capital of the U.S.,” makes sense for the burgeoning honey wine makers.

But Dale voiced sadness at having to leave his home, located on his current winery site, and moving to Imperial.  His brother will also be relocating.

But for two entrepreneurs accustomed to life-and-death situations on their jobs, perhaps moving to a new location is just the next stage in their lives filled with adventures.

Dale knows it will take hard work and continued promotional efforts even after relocating because that’s what it takes to “turn your dream into a business.”