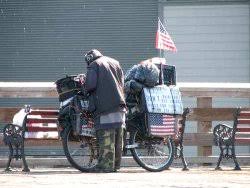 The program is based on a proven “housing first” model, which provides affordable housing while simultaneously providing supportive services including medical care, counseling, and more. Studies have shown that a small percentage of homeless people have accounted for a high amount of emergency medical services in the past. The PTECH program has already saved over $700,000 in city and public services.

“Together, we are able to aid this vulnerable population, while benefitting the community at large, both socially and economically,” said Brian Maienschein, commissioner of PTECH and a former San Diego Councilman. Mainschein told East County Magazine that it’s important to address the needs of homeless people countywide, including the growing number in East County.

Many of the homeless have disabling conditions. Over 30 percent have a mental disability, Home Again reports. Some have medical disabilities such as diabetes or illnesses which left untreated, resulted in emergency care or in some cases, death. More than 60 homeless people have died on streets of San Diego in the past year. A substantial number of homeless people also have alcohol or substance abuse issues. Many are veterans, including some disabled veterans from the recent wars in Iraq and Afghanistan. In San Diego, about 25% are farm workers and day laborers forced to choose between paying for food or shelter.

There are an estimated 7,800 to 10,000 homeless people in San Diego County—and nearly one in four are chronically homeless (continuously homeless for a year or without shelter four or more times in the past three years).

About 10% of the County's homelesse are in East County, according to the Regional Task Force on the Homeless. Another 15% are in the northeast inland region.  Homeless counts for East County and inland cities found 483 in El Cajon, of whom only 129 had shelter of any sort. Lemon Grove, La Mesa and Santee have 99, 26, and 15 homeless individuals—and none have shelter. In the unincorporated areas of the County, a count was only done in Lakeside and spring Valley, which had 144 and 284 homeless people respectively—none with shelter.

The City of San Diego has the lion’s share of homeless (4597) of whom 2484 had shelter when the annual homeless count was conducted. Among inland cities in the northeast section of the county, Escondido has 741 homeless (455 sheltered) while Poway has 33, none sheltered.

In June 2009, PTECH distributed nearly $800,000 raised by the United Way to four local groups, then distributed another $427,000 in June 2010. Grant recipients to date include the Crisis House in El Cajon, Alpha Project, San Diego Rescue Mission, and Townspeople.

Alpha Project has helped 85 chronicalyl homeless individuals secure permanent housing and provided over 600 counseling sessions and medical services to over 300 patients. The goal was to outreach to at least 300 people a month; in September, Alpha Project reached 700 people.

Townspeople’s program has helped five chronically homeless individuals obtain supportive and affordable housing and participate in a recovery program, abstaining from alcohol or other substance abuse for at least six months.

McElroy discussed the plight of one chronically homeless man who finally received a home of his own for the first time in many years. “You should have seen his face,” he said, adding that the man was also motivated to reestablish contact with his family.