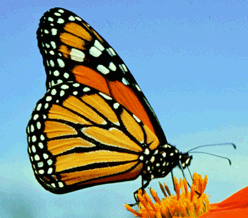 September 24, 2014 (San Diego’s East County)--Earlier this year, we reported on a 90% decline in the number of Monarch butterflies in their annual winter migration to Mexico. But now, there are signs of hope on the horizon.

In St. Louis, weather forecasters were baffled at first by a strange cloud that turned up on radar, moving across the city.  It turned out to be an enormous flock of Monarch butterflies, presumably migrating south toward Mexico.

Associated Press reports that Luis Fueyo, the head of Mexico’s nature reserves, says butterflies are arriving early this year in the northern border state of Coahuila, where in the past, acres of trees have turned orange from the fluttering flocks.

He said the first butterflies have been sighted in the northern border state of Coahuila. Most normally arrive in October from the United States and Canada to spend the winter in the mountaintop forests of Mexico. A count won’t be made until December or so, but experts are hopeful that a pact between Mexico, Canada and the United Sates to help save monarch butterflies will be in place before then.

That plan includes creation of milkweed corridors along the entire three-nation migration route. Milkweed is the only plant on which Monarch butterflies lay their eggs, and which feed the emerging caterpillars that in turn, form chrysalises and emerge as butterflies.

In recent months, organizations across America have been educating the public about these threats to the survival of the beautiful orange Monarch butterflies—and many groups have begun giving away packets of milkweed seeds.  Perhaps all those people planting milkweed to help the butterflies is making a difference, as the butterflies take wing on their annual and amazing tri-continent migration.