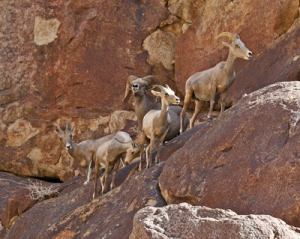 Participants reported good news—sighting 329 sheep. That’s the second highest count on record (after 356  in 2009) and substantially more than last year’s count of 255.

Bighorn sheep can weigh up to 240 pounds, scamper up the vertical cliff of a mountain, and guzzle up to three gallons of water to survive in 120-degree heat.

“When two male sheep knock horns in a territorial battle, it sounds like guns going off,” said Gary Katz, public relations director for the Anza-Borrego Foundation, which has sponsored the annual sheep count for the past 41 years. “These battles can continue for hours.”

Volunteers from San Diego and a 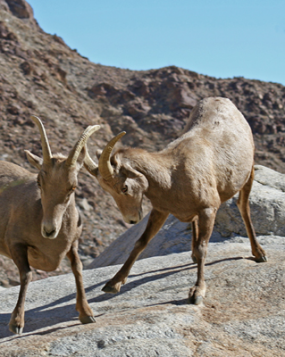 s far away as the East Coast participated in the count. Some hiked miles to sit 10 hours a day in temperatures ranging from 100 to 120 degrees—all for the rewards of glimpsing the endangered species. The count is done in July because the animals must come down to watering holes during the extreme heat, making them easier to spot. In winter, they spread out over a much larger range.

Disease and predators had dropped the park’s total population to under 300. But with protections, the animals have been making a slow but steady comeback. Following adoption of the Endangered Species Act in 1998, about 100 animals were released into the wild by a conservation group that raised or rehabilitated them. Removal of livestock from portions of the sheep’s range also helped buoy a recovery, eliminating diseases, as did construction of additional watering holes. Last year, the population was estimated at close to 500 in the park. (Not all areas of the park are counted, so the total number spotted is extrapolated to estimate the numbers in other areas.)

The increased population of bighorn sheep bodes well for predators such as mountain lions that rely on sheep populations in the region to survive—but also may lead to sheep population reductions from predation.

The largest numbers of sheep were seen at Rattlesnake Spring (84), though the most rams were spotted at Middle Spring-Tubb Canyon (23), the Union-Tribune reported.

Future habitat encroachment, however, remains a concern due to several major desert solar farms and wind energy projects planned in the region.