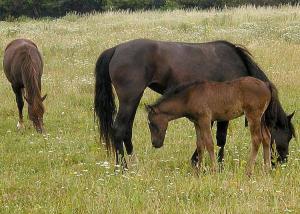 September 28, 2015 (San Diego’s East County) – Western Blend horse feed, manufactured by Western Milling, has been linked to deaths of three horses and illness of dozens more.  The feed contains monensin, an ionophore that is used to put weight on cattle but that is toxic to horses. There is no antidote for the poisoning.

On Sunday, the company announced a recall of Western Blend sold in 50 pound bags in California and Arizona, with the lot number 5251. ABC news reports the deaths occurred in Fresno.

Western Milling’s recall notice advises that of 1,100 bags identified with the hazardous additive, all but 67 have been found.