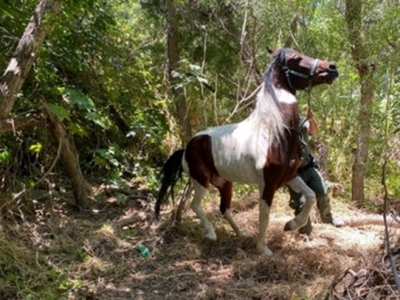 July 21, 2020 (San Diego) – A horse named “Ollie” reported missing in May has been found by Border Patrol Agents in the Tijuana River Valley area of San Diego.

U.S. Customs and Border Patrol announced Monday that agents found the horse tangled in a thicket on July 15.

Members of the Imperial Beach Station's All-Terrain Vehicle Unit were tracking a group of people who crossed the border illegally when they discovered the horse tangled in thick brush, according to CBP agent Jeff Stephenson. A K-9 team and horse patrol agents joined the ATV team to clear a path to access the trapped horse, which appeared to be weak and in distress.

After freeing the horse, they found that his markings matched those of Olllie, whose owners had offered a reward for his safe return. The agents loaded Ollie into a trailer and returned him to his owners but declined to accept the reward.