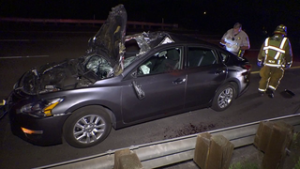 March 11, 2015 (Alpine) – Two horses running loose in Alpine early this morning were hit by vehicles, and one horse is dead. The California Highway Patrol is trying to find out who owns the horses; if you have information please call Animal Control at 619-498-2305.

CHP dispatchers received calls starting at 1:15 a.m. about several horses running wild on eastbound I-8 at Willows Road.  A rental car struck and killed one of the horses, which caved in the roof, went through the windshield and rolled on top of the vehicle, smashing in the roof, 10 News reports.

Fortunately the driver was able to escape and was not seriously injured.

A second horse was struck by a pickup truck on Alpine Boulevard west of Willows Road.  The animal suffered injuries to a rear leg and was stitched up, but is expected to recover.  It was taken to the County Animal shelter in Bonita. The driver was not seriously injured.